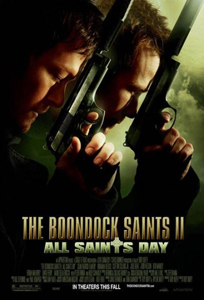 Great cinematography, some clever dialog, and plenty of cartoon violence mark this sequel to the original 1999 cult favorite. Having a good cast doesn’t hurt either.

As the pic begins, we come upon the MacManus brothers—Connor (Sean Patrick Flanery) and Murphy (Norman Reedus)—hiding out with their father (Billy Connolly) in rural Ireland. This laying low is a result of their vigilante campaign against organized crime in Boston, portrayed in the first movie. During that rampage, they got the name “Boondock Saints.”

The brothers’ pastoral life, replete with sheep, is interrupted by a visit from a local priest (Mairtin O’Carrigan), who informs them that a beloved priest back in Boston has been murdered, by someone using the Saints’ modus operandi. Clearly, this is being done to flush them out of hiding, but the brothers don’t care. They will get their revenge.

As they prepare to leave for Boston, they undergo a transformation from shaggy-haired shepherds to their former bad ass selves, in a scene reminiscent of Geena Davis’ conversion from suburban mom back to secret agent in The Long Kiss Goodnight (1996). Meanwhile, in Boston, three local cops are investigating the crime scene, and are worried that this murder will focus back on the Saints, and their relationship with them.

Adding to the cops’ concern is that crack FBI agent Eunice Bloom (Julie Benz) is put on the case. Bloom has excellent crime scene analysis skills, and quickly determines that the priest could not have been killed by the Saints. Rather, this killing was done by a single perp, imitating their style. She figures that the innocent priest was killed strictly to get them to return to Boston, possibly so they could be executed by mobster Concezio Yakavetta (Judd Nelson), running the crime family formerly led by his father, who was killed by the Saints at the end of the first movie.

As the brothers make their way to Boston on a freighter, they meet up with Mexican-American tough guy Romeo (Clifton Collins Jr.), who is from Boston, and offers to use his contacts to help them. More characters are introduced, and flashbacks explain how their father became a hit man, and his relationships with the mob in Boston. Peter Fonda enters the pic later, doing one of his enjoyable quirky character roles.

Everything plays out amidst much stylized violence, with a few surprises along the way. The story line sets up Boondock Saints III, but that project will depend on the success of this one, of course.

As with the first film, the majority of critics didn’t like it. NY Times critic A.O. Scott was most honest with this observation: “I will not defend it as a good movie, but I have to say, I had a pretty good time at it.”

Yes, having a pretty good time at the movies—what a concept!

« 2012
HOW A LEGITIMATE ENVIRONMENTAL PROBLEM CAN BECOME NO PROBLEM »