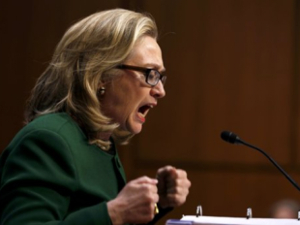 Most of us are familiar with the bromide “Real life is more like high school than college.” This proverb is widely accepted, for the simple reason that it is—as the Brits would say—bang on. Supposedly childish high school elements such as cliques, gossip, outward displays of wealth and status, risky behavior, base envy, pettiness, and romanticization of criminal elements are all found to play dominant roles in real life.

Consider the unlikely career of one Hillary Rodham Clinton, who after a shockingly inept tenure as Secretary of State considers herself worthy to be president. Objectively, Hillary has accomplished these few things on her own accord:

3.     Mounting two successful campaigns for the US Senate

While these accomplishments are legitimate, and surely look good on the résumé, some deconstruction is in order.

Hillary’s major at Wellesley was political science, generally regarded as one of the easiest fields. Moreover, its content is extremely subjective, and performance is judged largely on bloviations, rather than intellectual problem solving. Throw into the mix Hillary’s barracuda personality and the ease she must have had intimidating her spineless male professors no doubt caught up in the 1960s ethos, and this notch in her belt looks a bit less impressive.

As to marrying Bill Clinton, the phenomenon of a popular young rake marrying a homely bookish woman to make himself appear more serious for political reasons is not exactly unknown. Nor is the serial adultery that occurs afterwards. FDR is the most obvious example of this, with his miserable wife Eleanor being raised to iconic status in Democratic circles. Ironically, Bill Clinton’s role model, JFK, saw no need to go with homely and instead injected class with Jackie. Yet, the serial adultery remained.

While Hillary’s two senate victories cannot be denied, few Republicans have been elected to the US senate from New York in the last hundred years, and the longest tenured, Jacob Javits, was a quintessential RINO. It must also be noted that in her 2006 re-election effort, the Republican opposition was weak and disorganized.

What is undeniable, though, is that she was undistinguished in the Senate and disastrous at State. Yet, she enjoys tremendous support—especially among women. But, why?

For an answer, let’s journey back to high school, contrasting my own experiences at a public institution, with my sons’ at an all-boys’ Catholic High School. At my coed public school, the homecoming queen was elected by the entire student body, and was never the best-looking girl. Instead, she was the one superficially perceived as the “sweetest” and most mainstream, while still being reasonably attractive. It helped if she had some position in student government.

At my boys’ school, though, the homecoming queen was chosen from their partner all-girls’ school, and voted on only by the boys. The winner was always the best-looking girl. What’s more, her princesses were inevitably the beauty contest runners-up. The winner one year was an astonishingly beautiful girl, who, in keeping with the high school ethos, had no time for the high school boys, and dated an older college guy. Tragically, as she and her boyfriend sped toward Las Vegas one summer night, as her parents thought she was attending a local party, she was killed instantly in a single car accident.

My take is that women support Hillary because she is ugly, and has achieved success in a man’s world, even though her actual accomplishments are few. Indeed, women also supported Eleanor Roosevelt, because of her appearance, her “heroic” acceptance of FDR’s cheating, and despite her personality being even worse than Hillary Clinton’s.

You see, ultimately, there is hope. If these ugly women with miserable personalities can make it, so can I. And, if not, I’m still better looking and my guy doesn’t cheat on me, right? How high school…how real life can you get?