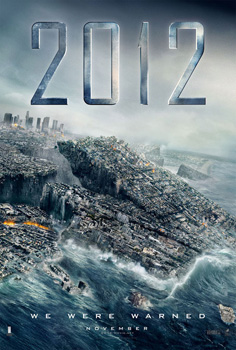 Too long by at least 45 minutes, full of plot holes, and overburdened with special effects—not all of which are even that good—this film provides some excitement, along with a fair amount of unintentional humor. Helmer Roland Emmerich is faithful to the rules of the disaster genre set forth by Irwin Allen: All lesser players (except kids) are doomed to die, as the stars miraculously survive. Emmerich adds a few of his own rules, including a fully diverse set of characters and locales.

The action begins in 2009, as Indian scientist Dr. Satnam Tsurutani (Jimi Mistry) explains to American government scientist Adrian Helmsley (Chiwetel Ejiofor) that the Earth’s core is heating up. Apparently, this is being caused by mutant neutrinos. (Try that one out on your physics professor). This will lead to some sort of cataclysmic event in 2012.

Adrian rushes back to Washington with the news, and before long, most of the world’s governments are working on a secret plan to prevent the extinction of the human race.

While this seems like enough of a context to flesh out a movie, scripters Emmerich and Harald Kloser feel compelled to add more characters and more backstory. Thus, we encounter unsuccessful novelist and part time limo driver Jackson Curtis (John Cusack), who is about to pick up his two kids from his estranged wife’s house, and embark on a camping trip at Yellowstone National Park.

Somehow, this does not seem particularly convenient to their LA residence since the park is around 1000 miles away, but it only takes about 30 seconds of screen time for them to arrive. Oddly, during the journey, father and daughter sing a portion of A.P. Carter’s gospel chestnut “Will the Circle Be Unbroken?”—not exactly at the top of the list for current seven-year-olds or even their parents.

Once in Yellowstone, Jackson searches for a particular spot where he and his ex once camped. However, it is behind a fence covered with “Restricted Area” signs, which the happy trio simply climb over. Jackson finds the spot all right, but the promised lake is mostly gone, being replaced by a steaming hot spring. Within moments, a number of soldiers descend upon them, but harsh treatment is avoided, since good old Adrian Helmsley (remember him from the beginning?) takes over, and they are escorted back to their car.

Meanwhile, this scenario is being observed, and commented on, by Art Bell style radio personality Charlie Frost (Woody Harrelson)—easily the most engaging character in the pic. Charlie seems to know all about the 2012 catastrophe, but Jackson is too sensible to listen to that sort of nonsense, right?

This all changes when gigantic earthquakes hit LA, so Kate (the ex, played by Amanda Peet) desperately calls them home. Timed almost exactly on their arrival, though, a series of comic book quakes tears through the neighborhood, leading to a ludicrous sequence in which Jackson is driving a limo carrying his ex, their two kids, and Kate’s new boyfriend Gordon (Tom McCarthy)—a plastic surgeon who specializes in boob jobs. Jackson is able to pilot the big car effortlessly through impossible obstacles, as they head from one peril to the next—for the rest of the movie.

*** SPOILERS AND DUMB / INTERESTING THINGS ABOUT THE MOVIE ***

The idea of the end of the world in 2012 is taken from the ancient Mayans, who prophesied that December 21, 2012 would be the end of the world—or at least that some form of universal catastrophe would occur. It seems that a particular event occurs on a 5,125 year cycle, whereby the sun is at solstice, and lines up with a dark band in the Milky Way called the Galactic Equator.

This should be important to you if you also believe—as the Mayans did—that the sun is a god powered by human sacrifices, and that the Milky Way is a gateway to the afterlife. At any rate, all the so-called “Mayan prophecies of 2012” are only speculations based on Mayan hieroglyphs, and beyond the astrological convergence, it is unlikely that the Mayans prophesied anything. Indeed, the Mayans were not prophets; they didn’t even predict their own cultural extinction.

Back to the movie. To preserve the species, a massive program is undertaken to save a select few people and put them on arks, as protection against the predicted tsunamis. Although the lucky ones are supposed to be chosen for sound genetic reasons, many of the potential survivors can buy their way on board for €1 billion per seat. A stupid plot hole thus emerges. Despite ultimate secrecy of even the cataclysm, let alone government plans to save certain people, thousands of individuals must be told about the arks, and yet there is not a single leak of information to the general public.

Note that this total does not include the additional thousands who must work on building the arks, and the crews. Good luck trying to keep the knowing workers off the rescue arks, when it’s time to depart.

Despite the 2½ hour running time, absolutely nothing is shown regarding how various skill sets are to be selected for among the survivors, and except for a few seconds showing an airlift of large animals to the ark, nothing is explained regarding how a food supply is supposed to be created once the arks can land.

Cell phone communications are completely supernatural, functioning even after entire cities and countries have been destroyed. In a classic absurd scene, moments before a tsunami will wipe out most of India, Dr. Satnam Tsurutani is calling Adrian and bidding him adieu.

The computer models predicting the progress of the cataclysm are shown time and again to have been incorrect, yet once disaster strikes, they can be used to predict the exact time a tsunami will hit the docks housing the arks.

Because of ongoing natural disasters, one of the arks is rendered inoperative, leaving thousands stranded at the docks, although the condition of this ark is well-known to authorities who mislead everyone, including official ground personnel. As the other arks prepare to leave, Adrian convinces the captain to open the doors of his ark, letting in an untold number of extra people. This decision is condemned—and rightly—by the presidential chief of staff, since the ark barely averts disaster by leaving too late with this extra load. Yet, he is portrayed as a terrible uncaring villain.

The ark described above cannot turn on its engines unless the doors are fully closed, and this function can’t be overridden. In fact, in an overlong sequence, the gigantic doors are prevented from closing by a piece of cable, which would actually be crushed to bits in its massive gears.

Given that the poles will have shifted, so that at the end of the movie the south pole is in Wisconsin, how do the arks navigate? How can GPS software be updated on the fly to reflect polar shifts?

Enjoy 2012 for the pure action, but shut off your brain for the full running time.

« WAS THE FORT HOOD INCIDENT A TERRORIST ATTACK?
THE BOONDOCK SAINTS II: ALL SAINTS DAY »