These days, the term “populist,” when it is used at all, refers to a person or movement which purports to represent the rank and file of the people—or at least the interests of the middle class. However, since there are precious few common interests of the middle class beyond having a steady job and not paying excessive taxes, the extreme social engineering taking place in the US and other Western democracies is usually not deemed “populist.”

At one time, there was a Populist political party (founded in 1892), reflecting largely agrarian interests. Its platform included an increase in the circulating currency (to be achieved by the unlimited coinage of silver), a graduated income tax, government ownership of the railroads, a tariff for revenue only, the direct election of U.S. senators, and other measures designed to strengthen political democracy and give farmers economic parity with business and industry.

The free silver movement was an early version of the much-to-be repeated government game of inflating the currency for the benefit of certain economic interests. Supporters of free silver included owners of silver mines in the West, farmers who believed that an expanded currency would increase the price of their crops, and debtors who hoped it would enable them to pay their debts more easily.

The populists were criticized by many as being little more than socialists, and given their support for government-owned railroads and a graduated income tax, it would be difficult to disagree. Less obvious, but just as insidious, was the eventually successful notion of direct election of US senators (17th amendment, 1913).

As originally intended by the Framers, the Senate was supposed to represent the interests of the states, in a sort of ambassadorial sense, to the Federal government. Thus, the senators were to be appointed by the state legislatures.

Direct election changed the function of the Senate to be just one more federal body, that while certainly promoting pork projects for its own states, does nothing at all to limit federal encroachment. Ironically, about all the states can do on their own at this point—beyond various trivial licensing functions—is to surpass federal mandates! (As in giving out more freebies than what the Feds require.) Surely, they cannot elect to do less.

Although Lincoln was the president who single-handedly created the notion of the overarching Federal government, it was Teddy Roosevelt who first unleashed a staggering array of populist/socialist programs on the American people. Nearly all of them were derived from current issues, and were based on the sad concept that only the grand and powerful Feds could solve the problems. TR was also the first RINO (Republican in name only), paving the way for many to follow.

When Federal programs expanded dramatically during FDR’s tenure, it was soon discovered that results did not matter. Indeed, most of his programs were horrible failures. Instead, it became clear that programs serve only to increase Federal power and tax revenue. If they can be sold to the public as populist, so much the better, although most of the programs are never directly voted on by the public, anyway.

LBJ’s famous War on Poverty was launched on national TV in 1964, with a visit to Tom Fletcher, a down-and-out resident of Appalachia, with eight kids. But, a year later, the net effect of the War on Poverty on Tom Fletcher—LBJ’s hand-picked poster boy—was just more disappointment and lots of food stamp booklets. LBJ and company didn’t care about Fletcher, and there was scant media follow-up. Thus, it is hardly surprising to hear that this “War” ended up spending more than $180,000 per poor person, without making any real change in the rate of poverty.

Given a sycophantic liberal media unwilling to expose this nonsense, and a brood of viperous politicians determined to increase taxes and expand Federal power, the beat goes on. As such, one can readily understand why the programs hardly ever work: Nobody cares and no one is accountable.

Foolish “conservatives” attribute the failure of programs to basic government incompetence but this is a superficial analysis. When the Feds care about something—the Secret Service, the IRS, the Architect of the Capitol, for example—it most surely does work. It is just that they seldom care.

One other phenomenon is diminishing returns, but at a higher budget. From 1970 to the mid-1980s, the EPA did do some good, but now is focused—at ever higher budget levels—on studying trace chemicals in a vain attempt to prove harm, and a successful attempt to over-regulate.

California is only the first example of how “unlimited” money will never be enough for rapacious politicians. Expect more failures of more states. 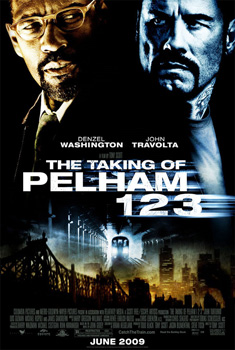 At least as enjoyable as the 1974 original, if not more so, and not just because of the hyperkinetic pace and high-tech. In helmer Tony Scott’s current version, we get to know a lot more about the chief baddie Ryder (John Travolta), and Walter Matthau’s transit cop has morphed into subway dispatcher Walter Garber (Denzel Washington). On the downside, character actor Luis Guzmán is wasted in the updated Martin Balsam role, and the hostages are pretty monotone during their ordeal.

The plot is simple enough: The namesake subway train (starting out from the Pelham Bay Park station at 1:23 PM) is hijacked by Ryder and his accomplices. They demand a $10 million ransom, to be paid in one hour. If they do not receive it within the allotted time, they will start killing one passenger every minute, until their demands are met.

Strictly by chance, Garber becomes the contact point for Ryder, and Ryder makes it clear—in a deadly fashion—that he wants nothing to do with an official NYPD hostage negotiator (John Turturro). Both lead characters have a back story. Garber is under investigation for taking a bribe while on a vendor visit to Japan, during his former higher-end job with the transit authority. He has been demoted, pending the outcome of the investigation.

Ryder was a high-roller Wall Street type, who was sent to prison for embezzlement. The authorities never found all of the money, and it is later revealed that the big prize in this scheme is to profit from gold futures, skyrocketing in the wake of this supposed terrorist attack on the subway. To monitor his investment, Ryder has his henchmen install a router in the subway, so that he can use a wireless Internet signal. The same signal is utilized by one of the young hostages, who contacts her girlfriend, and provides a live feed of the subway car to the media.

Once the mayor (James Gandolfini) agrees to pay the ransom, much is made of the police journey (inexplicably by auto) to bring the cash from the Brooklyn Federal Reserve to the subway car. A few critics (including Roger Ebert) have complained about the overblown special effects used during this sequence. My take is that this is complaining about minutiae, although Ebert has always obsessed on scientific reality—sometimes with good reason, such as in Radio Flyer (1992)

It is no spoiler to mention that the only way a ransom caper like this can work is for the perps to be able to leave the subway tunnel undetected. In the original, Matthau figured out where the exit would be and confounded ringleader Robert Shaw. In this version, it is not quite as straightforward, with Garber being involved to the bitter end.

Reviews are definitely mixed, with the negative ones heaping far too much praise on the original, while mocking Scott’s style, and holes in Brian Helgeland’s script. But this is too facile. No doubt, the perfs in the original were better, but the contrived ending—again overpraised—in which Martin Balsam makes good his escape only to be betrayed when his characteristic sneeze is recognized (as if that alone would guarantee a conviction) deems the 1974 version far from perfect. At any rate, Pelham’s story suffers, in both versions, from an exciting set-up and a far less satisfying resolution.

Perhaps the crix preferred the gritty awfulness of 1974’s NYC. For me, nostalgia is mostly overrated, if not pretentious and just plain misguided. As honest historians will tell you, the good old days weren’t all that good.