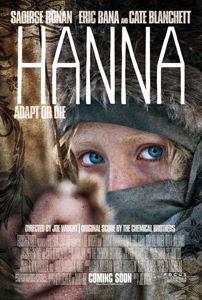 Teen phenom Saoirse Ronan delivers a super performance in the title role, as helmer Joe Wright offers us some art house sensibilities, along with the action. The story could have been better, but for a popcorn movie, it does work quite well.

As the pic opens, Hanna, living with her father Erik (Eric Bana) off the grid in northern Finland, has just taken down a reindeer, with an arrow. As the animal lies dying she says “I just missed your heart,” but then pulls out a handgun and shoots it. Apparently, the two of them have lived in isolation for all of her 16 years, although he has done a pretty good of homeschooling her, and not just about the usual things.

Hanna is skilled in weaponry and hand-to-hand combat, and Erik—a former CIA operative in hiding—tests her relentlessly. He has taught her that some day, there will be people coming to kill her, and she must be ready. He knows that the two of them cannot stay in hiding forever. When the time to get out of hiding does come, they must go their separate ways, but plan to meet up in Berlin.

Hanna has to decide when she is ready, and by actuating a homing device, will broadcast her location to her pursuers, thus putting us into the international chase that dominates most of the film. The main baddie is CIA operative Marissa Wiegler (Cate Blanchett), and exactly why she is so desperate to find the father and daughter is wisely not revealed until the end.

So, what we really have here is the thrill of the chase, which takes us from Finland to Morocco, to Spain, and on to Germany. The narrative alternates between Erik and Hanna, but Hanna’s journey is far more interesting.

In Morocco she hooks up with a British family off on an extended vacation, and gets her first lesson in social interaction. Meanwhile, Marissa is pulling out all the stops to find—and terminate—Hanna and Erik.

After the CIA goons are unsuccessful, Marissa lines up a trio of rent-a-thugs, led by Isaacs (Tom Hollander)—a laughably flamboyant Eurotrash stereotype, replete with bleached blond hair. Ultimately, though, it will all play out in Berlin, in a curious fairytale setting.

Although setting off the homing device is necessary to drive the plot, one wonders why the father/daughter team could not have just left their Arctic digs without immediately revealing their location.

It would have helped to include a bit more backstory as to just why the “build the perfect warrior” project that created Hanna had to be stopped, with such extreme prejudice.

While Erik’s German accent makes some sense, Marissa’s southern drawl is more than silly. And why her obsession with dental hygiene and sensible shoes?

As always, Hollywood’s fixation on the CIA as being some sort of evil, all-powerful institution is so far off the mark as to be quite amusing in itself.

The touchy-feely Brit family occupies a lot of screen time, but creates some good moments.

I did enjoy the fine flamenco performance, that—along with the fairytale setting in Berlin and the study of feminine psychology—distinguishes this movie from typical action fare.