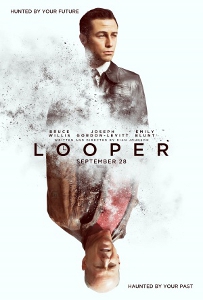 A time travel adventure that’s being overpraised by most of the critics. Featuring a voice-over to explain the odd sequence of events, the story has its moments, but ultimately is unsatisfying. As with most time travel stories, the paradoxes abound. Looper, though, embraces the very paradoxes other films tend to avoid—and I don’t mean that as a compliment.

The setting is—inexplicably—Kansas..2044. I say “inexplicably” since it could just as well have been Kansas…2012, or even Kansas…1952, but for a very few futuristic touches. The main point is that time travel will have been invented in 2074, but will rapidly become illegal. Its primary use seems to be for gangsters to send their enemies back 30 years (to 2044) whereby they will be summarily executed by hired killers called “Loopers.”

Immediately, of course, a big paradox occurs. If I send a guy 30 years back into the past, how can he remain as the 2074 version of himself? And, if he is killed in 2044, then how would he even exist in 2074 in the first place? Time to invoke suspension of disbelief, big time.

Bruce Willis and Joseph Gordon-Levitt play older and younger versions of Looper Joe. The narrative shifts between “present day” for each version. We see Younger Joe efficiently whack numerous victims, and Older Joe in China, a changed man with an adoring wife. Younger Joe is also a drug addict, who hangs out with hookers, especially Suzie (Piper Perabo).

Younger Joe’s friend Seth (Paul Dano) gets wind of a nasty turn of events. It seems that some time in the 2070s, a notorious almost supernatural crime leader called “The Rainmaker” will come to power, and is determined to cover his tracks. This includes, as he puts it, closing the loops. Thus, the next contract a 2044-era looper might have is to kill an older version of himself. As it happens, this has already occurred with Seth, only he let the older version of himself go free.

Bad move for him. 2044-era crime boss Abe (Jeff Daniels) does not liked messed-up contracts, and is out to kill Seth, who gets little help from Younger Joe. However, Younger Joe’s next contract is none other than…Older Joe! The difference is that Younger Joe would love to whack him, although the older version eludes him.  Meanwhile, Older Joe wants to locate and kill the 30-years-younger version of the Rainmaker, who was responsible for killing his Chinese wife.

Now, both versions of Joe are being hunted in 2044, and all will be resolved on a farm where a single mom and her strange son live.

One particularly annoying scene involves the capture of Older Seth in 2044. Again, never mind that both versions of Seth exist simultaneously in 2044. A foolish conceit, repeated in the movie, is that any injury inflicted in 2044 will appear as a scar on the older victim. In other words, if I take Younger Seth and cut his arm in 2044, it will have developed into a scar that can be observed on Older Seth, now returned to 2044.

Possibly, this is credible, except they blow it big time by torturing Younger Seth in 2044, removing limbs to the point that he is little more than a trunk. This is shown on screen by a rapidly deteriorating Older Seth. But, think about this. If I injure someone in 2044 to such an extent, how would they survive to 2074, to then be sent back? I would expect this sort of nonsense is some teenager’s time travel story, but not in a major motion picture.

Important to the story is that by 2044, a mutation—affecting around 10 percent of the population—gives them the power of telekinesis. Thus, writer/director Rian Johnson would have us believe that in barely one generation such an incredible genetic change can exist in such a substantial portion of the population. This was stupid anyway, since it only matters that the child Cid, who lives on the farm, is telekinetic.

Yes, indeed, Cid will become the Rainmaker. But, fear not. Even though he has already killed one or more people in anger, if only left alone to be raised by his sainted mother Sara (Emily Blunt), he will grow into a model citizen. So, he is saved in the end, and MAJOR SPOILER Younger Joe kills himself, thus saving everyone.

Whoops! If Younger Joe offs himself in 2044, where does Older Joe come from? Or, what was the point of the whole movie?

Fun fact: In a completely unnecessary sex scene between Joseph Gordon-Levitt and Piper Perabo, she removes her top. She should have kept it on. Didn’t anyone watch the dailies?

In one more grotesquely dumb mistake, Sara keeps referring to “cane fields” on her farm.   In Kansas?