a:  a long-drawn-out circumstantial story concerning an inconsequential happening that impresses the teller as humorous but the hearer as boresome and pointless      b:  a similar humorous story whose humor lies in the pointlessness or irrelevance of the punch line

I used this expression the other day, but it was not understood by the guy I was speaking to—a fairly sophisticated Washington hand. I then tried it out a few more times, and found that people had heard it, but many did not know its meaning. That’s too bad, since we have all been exposed to shaggy-dog stories, even if we did not know what to call them.

One typical example is frequently told around campfires: Long before the era of cell phones, a solitary woman is driving home late at night and hears an ominous announcement on the radio. A homicidal maniac has escaped from a local asylum, and is said to be wandering the streets.

The woman drives on for awhile (and the story can pointlessly describe various things she passes along the way) but then one of her front tires gets a blowout. This happens on the outskirts of town, and she knows that there is a 24-hour service station about a half-mile away. She has no choice but to walk to the station for help.

She starts walking and soon notices a shadowy figure a block or so behind her. He is walking fast, and she begins to panic. She picks up her pace, but so does he. He is gaining on her! (Again, this whole business can be dragged out.)

He is getting nearer and nearer. Now, she breaks into a full sprint, but it is no use, he has caught up to her! He reaches out to grab her. She sees her life passing by her; it’s all over. Then he does grab her shoulder, and says this to her: “Tag! You’re it!”

Other shaggy-dog stories exist solely to set up a punchline that is an elaborate bad pun. Since the idea in these stories is to give some fractured rendition of a stock phrase, such as “The spirit was willing, but the flash was weak,” “Ah, Sweet Mr. Rhee of Life, at last I’ve found you,” or “One man’s Mede is another man’s Persian,” laying down all the elements necessarily will involve a lengthy and otherwise pointless narrative.

One of the best examples of a shaggy-dog story is a tale known to virtually everyone—Rumpelstiltskin. As you recall, the entire point of the story is revealed in its title, and simply comes down to guessing the man’s name. To achieve this, though, there must first be an incredibly elaborate build-up.

A miller tells the king that his daughter can spin straw into gold. The king orders her to do so under penalty of death three separate times, but if she succeeds the third time, he will make her his queen. A strange little man appears each time to help her, and asks some gift in return for accomplishing the amazing feat. The first time, she gives him her necklace, the second time her ring. But, on the third occasion, being poor, she has nothing left. So, she agrees to give him her first child, should she become queen.

Having spun straw into gold the third time, the girl is made queen, and within a year, she has given birth to a beautiful son. The little man returns, demanding the agreed upon payment. The queen’s reaction is so sorrowful that it melts the heart of the little man, who agrees to relieve her of the obligation if she can guess his name within three days. Hedging her bets, she sends out a messenger to discover any odd names that might exist in the hinterlands.

The little man returns to the palace the first day and the second day, but the queen cannot guess his name. The queen is desperate, and when the messenger returns that evening, she asks him if he has heard any new names. He says that he has not, but tells her that he did see a grotesque little man dancing around a fire singing…

“To-morrow I brew, to-day I bake
And then the child away I’ll take;
For little deems my royal dame
That Rumpelstiltskin is my name!”

On the next day, the queen guesses his name, and saves her son. Rumpelstiltskin is so angry that he tears himself in two.

All this for the punchline of his name.

It’s not too much of a stretch to observe that a great deal of contemporary politics seems to be like a shaggy-dog story. It is pointless, drawn-out, and tedious—only it’s not funny at all. And, the joke—if there is one—is on all of us. 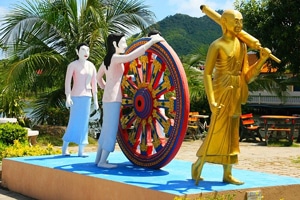 It’s never been easy to get into medical school, but if you were a white male, applying to a University of California med school in the 1970’s, it would never be more difficult. You see, these were the salad days of affirmative action, and if it was impossible for a white boy with a 3.5 GPA, high MCAT scores, and glowing letters of recommendation to gain admission, the floodgates were open for those of other demographics.

I personally know of dozens of absurd cases whereby eminently qualified and motivated young men were denied admission, while minority students or white women with barely 2.0’s were getting accepted to every UC medical school. Many of these favored souls would drop out, despite intense tutoring, and even being given test answers before they took the exams. Some would make it through, though, which brings us to Patrick Chavis.

In 1973, Chavis was one of five applicants accepted to UC Davis Medical School under a special racial preference quota. This meant that Allan Bakke, a white student with substantially better qualifications, was rejected. Bakke thought that this was flagrant racial discrimination, and sued. In what is called a landmark case—but really isn’t since this racism still occurs, but the schools are just more sneaky about it—the US Supreme Court sided with Bakke, who was later admitted to the school.

Fast forward to 1995. The New York Times Magazine published a ten-page article by Leftist hack Nicholas Lemann celebrating the wonders of affirmative action. And right on the cover of the magazine was a big picture of Dr. Patrick Chavis, the Left’s new poster boy for the blessed cause. After all, St. Patrick had returned to the hood, and was practicing obstetrics and gynecology (performing hundreds of abortions, of course), while Bakke was now merely an anesthesiologist in Rochester, MN, no doubt dealing with lots of white folks, heartless cad that he was.

Lefty pinheads Tom Hayden and Connie Rice sang the praises of Chavis, along with the perpetually incapacitated Teddy Kennedy, who spoke glowingly of “Bernard” Chavis making a difference in the lives of scores of poor families. In contrast, Bakke was nothing more than a typical country club doctor. If the story had ended here, it would have been bad enough. At best, this was foolish posturing, and profoundly negative at that. But, the story would not end here, as it would soon be revealed just what kind of difference Chavis was making in the lives of his patients.

On May 11, 1996, less than two weeks after Kennedy crowed about him, Chavis performed liposuction on Yolanda Mukhalian. Chavis had moved into cosmetic surgery, signing up for an exhaustive four-day course on liposuction, and then only attending it for two days.

Mukhalian’s surgery left her vomiting, sweating, urinating helplessly, and bleeding badly. Chavis knew better than to take her to a hospital, where he would be exposed as a scumbag quack. Instead, he took her to her home, where she bled for an incredible 40 hours, getting no care. He wouldn’t return her calls, and never examined her again. Finally, she entered another hospital on June 8th, with a severe abdominal infection. She was badly scarred, and had lost 70 percent of her blood. By some miracle, she survived, as did Valerie Lawrence, who told the medical board a similar tale.

Patient Tammaria Cotton died when Chavis performed her liposuction on June 22nd. She had complained of difficulty in breathing, but Chavis, he of the kindly bedside manner replied, “If you can talk, you can breathe.” Ever the healer, he abandoned Cotton when she started going sour.

The above, and scores of other complaints, resulted in Chavis’ license being pulled for good, in 1997. Unrepentant to the end, he was always an incompetent malcontent, crying racism at every turn. The IRS was against him, the banks were racist for not giving him loans, and he even sued Long Beach Memorial Hospital, where he did a residency. It seems that his superiors there thought he sucked as a doctor, and were less than willing to give him plum assignments. He practiced while his license was suspended, and he flaked out on child support payments. A true Liberal icon.

Now comes the good part. On the night of July 23, 2002, Chavis was shot and killed by unknown assailants, while stopping for ice cream in the LA suburb of Hawthorne. The details of this case have still not appeared in the media, and the LA Times did not even report the date that it occurred, in its story that ran on August 13th. Was the motive robbery, a carjacking, or was this a hit arranged by someone close to the legions of patients harmed by Chavis?

No one is saying, and no one really cares.