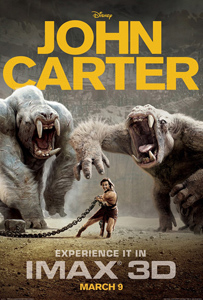 Based on the Barsoom series of Edgar Rice Burroughs, this film performed poorly at the box office, and was condemned—mostly without cause—by a variety of naysayers. Quoting Peter Travers:

John Carter, a post-Civil War-era Confederate soldier from Virginia who finds himself zapped onto the red planet (called Barsoom instead of Mars), must face a deadlier enemy than author Edgar Rice Burroughs could have dreamed up when he created the character 100 years ago. I’m talking about the toxic buzz that has curled around the movie before anyone had seen it. How dare it cost so much money ($250 million)! How dare Stanton think he can switch from animation [WALL-E (2008), Finding Nemo (2003)] to directing live actors! How dare they rip off Star Wars, Indiana Jones and Avatar? (Hey, haters: Burroughs got there first.)

In a prologue, we are introduced to Barsoom, and warlord Sab Than (Dominic West). Than is given a powerful weapon by three robed figures. With this, he should become master of his planet. The scene then quickly shifts to New York City, 1881, as Edgar Rice Burroughs (Daryl Sabara), Carter’s nephew, is summoned to Carter’s lavish estate. Upon his arrival, though, he learns of the sudden death of his uncle. The will is read, and Burroughs is given Carter’s journal, which he is to read at once. Thus, our narrative begins.

We flash back to 1868, as Carter (Taylor Kitsch)—a former Confederate captain—is treasure hunting. Cavalry leader Powell attempts to conscript him to fight the Apaches, but Carter escapes only to find himself in the very Evil Spider’s Cave he has been searching for all along. He encounters a mysterious robed man, whom he shoots. Carter grabs the man’s silver medallion, repeats the word “Barsoom,” and is transported off to the Red Planet.

Based on Mars’ lesser gravity, Carter is able to leap high in the air, and soon takes up the cause of the Tharks—an “alien”-looking race—that eventually joins forces with the human residents of the city-state of Helium, against Sab Than. Much action ensues, as the robed figures (called Therns) enter the proceedings from time to time, much like the gods of Greek mythology. Carter falls in love with the Helium princess Dejah (Lynn Collins), who is being forced to marry Sab Than.

Good will out, but there are many twists and turns along the way, including Carter being sent back to earth by the Therns, before he devises a clever way to return to Barsoom.

Peter Travers was right about the toxic buzz, but there were other factors that killed John Carter’s box office. For one thing, the plot is difficult to follow, with its vast array of characters, shifts in locale, and lack of emotional focus. The Star Wars series, in comparison, is simple-minded, but includes a rather obvious good versus evil conflict, and a love story or two. Other than having a rooting interest in John Carter himself, and possibly his beleaguered girlfriend, it is hard to care much for the brutal Tharks—even if they are supposed to represent the noble savages.

As always, a blockbuster movie must appeal to 17-year-old males, and on that level it fails miserably. The action is not intense enough, the conflict is too diffuse, and the romance has no passion. Edgar Rice Burroughs—and audiences— deserved better.