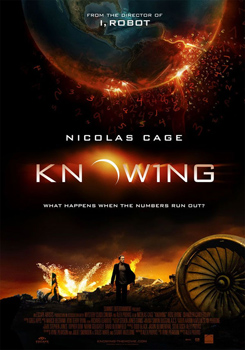 Interesting ideas marred by flawed execution, describes this latest effort from helmer Alex Proyas. Most of the critics didn’t like the movie, either because they are confused by the concepts, don’t like the bold theological references, or because they cannot forgive the uneven pacing and quirky narrative style—or maybe all of the above.

The film begins in Lexington, Massachusetts in 1959, as the new William Dawes Elementary School celebrates its opening by filling a time capsule with pictures of what the kids think the world will be like in 2009. This was the winning idea suggested by student Lucinda Embry (Lara Robinson), a sad-eyed girl whose own contribution to the capsule is not a picture at all. Rather, it is a sheet containing nothing but numbers, boldly written on both sides of the page.

Fast forward to the present, and the capsule is being opened during the school’s gala 50th anniversary celebration. The contents are handed out to a group of students, and Caleb Koestler (Chandler Canterbury) gets Lucinda’s contribution. He takes it home to his MIT astrophysics professor father John (Nicolas Cage) thinking that the numbers might mean something.

John, still drowning his sorrows over the loss of his wife, does take a look at the sheet, and numbers signifying 9/11/01 jump off the page. He later determines that the numbers listed reflect the date, number of deaths, and coordinates of essentially every significant disaster since 1959.

He explains this to a colleague (Ben Mendelsohn), who doesn’t buy it, but becomes a true believer the very next day when an airliner crashes at the precise location, and with the number of deaths specified. Ominously, a few more events are predicted, so the question becomes: What to do? Complicating matters is the appearance of some sinister-looking characters who seem to be tailing Caleb, and are even speaking to his mind in whispers.

To help make sense of it all, John tracks down Lucinda’s daughter and granddaughter. It turns out that the same characters are also hanging around Abby, the granddaughter (also played by Lara Robinson).

Meanwhile, John is beginning to sense that there is some sort of purpose here, and that Abby and Caleb are involved in a special way. For him to believe that there is a greater purpose in these events is a sea change in his attitude, since he is the now secular son of a pastor.

Things will get messy as the story unfolds, but the fast pace of events towards the end is probably realistic, given their gravity.

Although there are FX here, this is more of a cerebral sci-fi pic, as we examine the notions of a random or deterministic universe. We wonder also who these “whisper people” might be.

The movie’s ending is a bit of a surprise, and not all the questions are answered. We can tell you that all of Lucinda’s predictions come true, and that you will likely be talking about this film long after the lights come back on in your favorite multiplex.

Even if Proyas did not succeed completely, it was one hell of an effort. 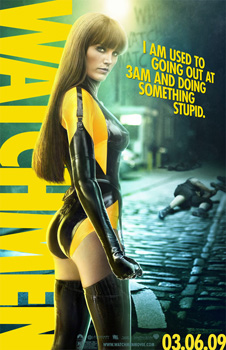 Rigorously faithful to the graphic novel source material and visually stunning, helmer Zack Snyder’s pic is too long, and in being so faithful to the source includes much detail that will seem extraneous to anyone who is not a full-fledged comic book nerd.

The film opens in the apartment of The Comedian/Edward Blake (Jeffrey Dean Morgan), former superhero or “mask,” now living in the alternate-universe 1985 in which Nixon is president, and the masks are outlawed. Blake is killed by an unknown assassin in a stylized battle, inspiring an investigation by another mask—who still wears his mask—Rorschach/Walter Kovacs (Jackie Earle Haley).

Rorschach believes that a conspiracy is afoot to kill all the masks, and sets out to warn them. Rorschach also provides narration throughout the movie. Although several characters are called “superheroes” in the story, they do not have any supernatural powers except for Dr. Manhattan/Dr. Jon Osterman (Billy Crudup). As told through flashbacks, after a nuclear accident Osterman developed a host of supernatural powers, along with an eerie blue glow.

At minimum he can restructure subatomic particles at will, perceive happenings on the subatomic level, live forever, resize himself at will and teleport. By following these powers through to their logical conclusion, there is probably nothing that Dr. Manhattan couldn’t do.

And, supposedly because he is progressively becoming less entangled with humanity and its conventions, he tends to parade around buck naked most of the time. Of course, he does seem to like human sexual practices.

Dr. Manhattan becomes integral to American defense policy, and promotes a decisive victory in Vietnam. At present, he has allied with a former superhero, or “Watchman” as they are also called, named Adrian Veidt (Matthew Goode). The two are working on a project to provide free energy to the world, using specialized energy reactors that will be deployed all over.

However, during an appearance on a TV talk show, Dr. Manhattan is confronted by a journalist who suggests that many people he has been associated with—including a former girlfriend—are dying of cancer. The implication, of course, is that his nuclear-reconstituted body is to blame. At this, he exiles himself to Mars, and his current girlfriend Laurie Juspeczyk/Silk Spectre II (Malin Akerman) hooks up with Daniel Dreiberg/Nite Owl II (Patrick Wilson).

Laurie and Daniel decide to get back into the superhero business, and become lovers. At the same time, Veidt is nearly killed by an assassin, and Rohrschach is framed for a homicide, sending him to a prison filled with perps he sent there. As you might suspect, though, the vengeful cons will have the worse of it, for in one of the movie’s best lines, Rohrschach tells them, “None of you understand. I’m not locked up in here with you. You’re locked up in here with me.”

More details are revealed in flashback as the real conspiracy unfolds, and it is far bigger than just killing off Watchmen. By story’s end, much is resolved, but it is not particularly satisfying.

With the exception of Crudup and Haley, the perfs are mediocre at best, and given Snyder’s desire to reproduce the graphic novel frame by frame, the actors do seem pretty confined. The most interesting character by far is Rohrschach, and that might be because he is the least conflicted, even if he is ultra-violent, and probably a bit nuts.

As a purely visual experience, Snyder could not have done much better, but judicious editing—even if it would have offended the comic book nerds—would have made a better film.

Why do these people still get credibility?

As if it weren’t bad enough that a March 2nd protest against global warming in DC will likely occur amidst a major snowstorm, we now hear from The National Resources Defense Council’s Allen Hershkowitz, who is attacking toilet paper. Really. He maintains that “People just don’t understand that softness equals ecological destruction.”

But before you switch from Charmin to sandpaper, let’s take a look at the facts.

According to the Competitive Enterprise Institute, even with our insatiable demand for nice, soft toilet paper, forest area in the U.S. has remained almost unchanged over the last century: around 33% of total land area. And this was accomplished as the population tripled. Looks like sustainable toilet paper and yet another unfounded Greenie scare.

Even on a worldwide basis, the rate of deforestation is about 0.2% per year, and this rate appears to be declining.

As the CEI notes, if this is the most scary story the Greens can come up with, I guess we are doing pretty well.

Some of us remember that FDR tried spending the country out of the Great Depression, and that the technique was an utter failure. Many sources have dug up this quote from FDR’s Treasury secretary and close friend, Henry Morganthau, speaking to Congressional Democrats in May 1939:

One interesting parallel between then and now is that in the late 1920s, money rates were cheap, and there was a stock market run-up preceding the big fall. Then, one of the causes was margin trading whereby an individual could purchase a share of a company’s stock and then use the promise of that share’s future earnings to buy more shares.

A semi-parallel, if you will, was that the 1920s saw a big boom in consumer spending, and this was a relatively new phenomenon. Again, credit was easy and defaults occurred, creating major problems for banks. In the recent past, we saw even more rampant consumer spending and debt formation, with even easier credit, especially in the mortgage market. The results are quite similar.

Performance incentives could drive it up to $115 million. It would seem that this amount is quite a bit to pay for a defensive player. After all, a quarterback can ALMOST win a game by himself, but one superstar lineman can usually be stopped by a good double-team. There is a reason they refer to some elements of a football team as “skill” positions.

Evidently, this does not include the front office anymore.

Ridiculously high salaries for pro athletes are generally explained by the unique skill sets possessed by these men. True enough. However, another aspect in salaries is the marketability of these skills. Other than a few dozen pro football franchises, where else can such individuals attempt to sell their wares?

The fact is, high athlete salaries are based on the egos of the owners (I’VE just signed the top pick) and nothing more.