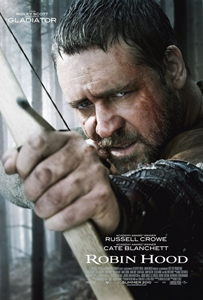 Gloriously staged battle sequences do not make up for an overlong, talky and fairly boring experience. Some story elements border on the ludicrous, and there is pointless tinkering with historical reality, along with PC revisionism. Viewers expecting to see the traditional Robin and his merry band in Sherwood Forest are in for a big disappointment, as are those who are expecting a sensible back story of the legend.

The pic begins at the close, not the “turn” of the 12th century—thus invalidating one of the opening descriptive graphics of the film, after specifically mentioning the year 1199. Given the reputed budget of $250 million, and purported (if untrue) rigor to history, this error is unforgivable.

Archer Robin Longstride (Russell Crowe) and his buddies are coming home from the Third Crusade, and must engage in one more battle. Led by Richard the Lion-heart (Danny Huston), this particular engagement is against the French. Richard is killed, and Robin and company decide that they have had enough of war, and will flee to England. On their way, though, they witness a group of French soldiers led by English turncoat Godfrey (Mark Strong) ambush an elite English contingent that is taking Richard’s crown back to England.

Robin and company force the French group to leave, but all the English are already dead or dying, and this includes the leader of the contingent, Sir Robert Loxley (Douglas Hodge). Loxley begs Robin to take the crown back to England, and return his (Loxley’s) sword to his father in Nottingham. While impersonating a knight is a crime punishable by death, the archers figure that this would be their best ticket back, and so don the chain mail and board the boat waiting for Loxley’s detail.

Richard’s crown is turned back to his mother Eleanor of Aquitaine (Eileen Atkins), who crowns her much inferior other son John (Oscar Isaac) as the new king. John is completely taken in by Godfrey, who is actually working for the French king Philip (Jonathan Zaccaï). The idea is to weaken John’s popular support, so that the French can easily invade.

Robin and his band (still masquerading as Loxley and company) leave London for Nottingham, and reach the Loxley estate. Here he encounters Lady Marion Loxley (Cate Blanchett), who, because of the hard times and high taxes, is outside working with the commoners. Apparently, owing to the constant wars, virtually all the children in the town are orphans, and to support themselves have become outlaws, stealing all the Loxley’s seed grain.

Robin intends to return the sword and leave Nottingham straightaway, but is persuaded to stay by Robert’s father Sir Walter Loxley (Max von Sydow). What’s more, since Marion cannot inherit the estate based on the misogynistic customs of the time, he convinces Robin to continue the masquerade, and act as Marion’s husband. Marion is not terribly keen on this, but realizes that it is the best course, under the circumstances.

Meanwhile, John is desperate for revenue, as the treasury has been depleted from Richard’s adventures. Trouble is, the people have already been taxed too much. Godfrey offers to bring in lots more money, using force, secretly hoping that this will make the people hate John even more. The building conflict will eventually reach Nottingham, and Robin will play a key role in its (at least temporary) resolution.

While one can forgive some historical inaccuracy in a popular feature, it is noted that the Magna Carta was signed before the French invasion portrayed in this movie, and not after. While that point does not really change the plot details, helmer Scott should be ashamed by his rip-off of Saving Private Ryan (1998), as he portrays the invasion.

Moreover, it is quite unlikely given the navigation abilities of the era that the French fleet’s landing site could have been so well predicted, as it had to be in the film.

Perhaps the most flagrant anachronism is the appearance of Lady Marion (a feminist, natch) in full chain mail in this battle against the invading French. Indeed, this item is doubly foolish as both she and Friar Tuck (Mark Addy) join the battle in perfectly fitting chain mail. Where did that come from, especially since most of the grunt soldiers involved in the fight were not so equipped?

The pic embarks on the relatively new PC tack of portraying King Richard as something less than a hero, again judging him by contemporary standards. Fair enough, but since many accounts of the real Richard peg him as tall and very handsome, thesp Danny Huston may not have been the best choice for the role. No doubt, though, the worst PC sin was given in Crowe’s speech to Richard as to how his army had become “godless,” after murdering innocent civilians.

Presumably, this charge refers to an incident in 1191 at Acre, when Richard killed 2,700 Muslim hostages during a truce. History records this matter a bit differently than Crowe’s speech.

For one thing, there were no women and children. Richard took the hostages as a guarantee that Saladin would release his own Christan hostages. This was part of the truce. Saladin did not release the hostages, even though Richard gave him three weeks beyond the original deadline. It was only after Richard concluded that Saladin would either stall indefinitely or simply not honor the terms at all, did he order that the hostages be killed.

In any case, there was plenty of blood on the hands of both leaders.

A key plot point is that Sir Walter knows the truth about Robin’s father, who died when the boy was young. As it happens, the father wrote what would become the Magna Carta, but was executed when he demanded various human rights. Robin finds the document his late father wrote, and uses its precepts to unify the quarreling barons to fight the French. King John verbally agrees to these rights, and that’s the only way that the baron unite, but oddly enough never signs anything!

Of course, after defeating the French he disavows this, and declares Robin, who is effectively the George Washington of England, to be an outlaw. This whole business is preposterous, and there were several shocked looks among my fellow moviegoers. Yes, the same army that the barons put together to defeat the French would now somehow become loyal to the hated King John. And, the barons would simply kowtow to this outrage. Right.

One is tempted to blame this on the screenwriter, but what usually happens is that a script changes during production. In this case, the change was surely not for the better. 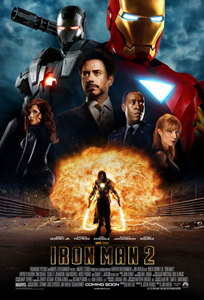 Too many characters, too much dialog, action sequences that seem uninspired at times, and a less than compelling story make this sequel a bit of a disappointment. You’d think they would care more about getting a good script, since even the 17-year-old boys are becoming weary of pointless, drawn out CGI “action.” Still, the film does hit a few true notes.

Party-hardy Tony Stark (Robert Downey, Jr.) has already let the world know that he is Iron Man, but now he has to appear before a senate committee. It seems that Senator Stern (Garry Shandling, looking puffy) wants him to turn his Iron Man suit over to the US Government. Stern brings on Stark’s competitor Justin Hammer, who tries to make the case that the technology should not be proprietary, but the presentation bombs and Tony gets the last laugh—or so we think.

Meanwhile, though, mysterious Russian Ivan Vanko (Mickey Rourke) hears his father on his deathbed blame all of their problems on Howard Stark, Tony’s late father and the elder Vanko’s former business partner. Ivan promises revenge, and will use some Stark Industries plans stolen by his father.

As Tony flits around the world, the scene changes to Monaco at Grand Prix time, and one of Stark Industries’ cars is entered. Much to the chagrin of his top assistant Pepper Potts (Gwyneth Paltrow), he commandeers the race car. Ivan shows up, dressed in his “Whiplash” suit and wreaks havoc on the track, until he is stopped by Tony, who fights him in his Iron Man suit.

Stark’s victory is pyrrhic, though, as now Tony’s contention that no one else has the iron man suit technology is disproven.

Too much of the movie deals with Tony’s self-destructive behavior, not to mention his body being slowly poisoned by the palladium-powered heart he installed in the original pic. Perhaps the most pointless scene involves a lengthy fight—in full Iron Man suits—between Tony Stark and best friend Lt. Col. James ‘Rhodey’ Rhodes (Don Cheadle). Samuel L. Jackson has a small role as the head of a mysterious security agency that needs Tony’s help, and Scarlett Johansson has way too little to do as a Stark operative.

The final confrontation has a great build-up, but ends on a curiously dull note.

As to the “few true notes” mentioned above, Senator Stern is a grasping, slimy incompetent. Sadly, that description is more applicable to members of the real senate than most people might realize. The shenanigans between defense contractor Justin Hammer and Congress are also spot on, unfortunately. The fact that a thug like Vanko would be utilized at the top levels of DOD also has real-life parallels, along with the Colonel Blimp-like general, who briefly takes over the Iron Man suit project.

The way the media gush over Tony Stark is uncomfortably reminiscent of its fawning over real life celebrities, and its neglect of what was once the more serious business of journalism.

Movie Line crit Stephanie Zacharek is spot on with this observation:

The big problem with Iron Man 2, maybe, is that it so dutifully gives the people what they want, instead of giving them what they didn’t know they wanted.