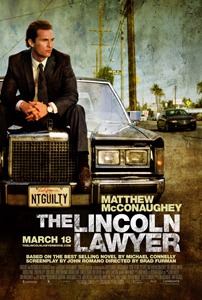 Well-paced legal thriller, with slightly over-the-top characters. The top critics have looked with favor on this one, although the few that disagree object to the plot clichés, and seem to think that the real world of criminal defense can’t get this sleazy. Unfortunately, it can and it does.

As the pic opens, defense attorney Mick Haller (Matthew McConaughey) is heading toward a court appearance, and is stopped by bail bondsman Val Valenzuela (John Leguizamo), who gives him a lead on a potential new client. Haller tends to his business at the court, and rushes over to see the new client, a spoiled rich kid named Louis Roulet (Ryan Phillipe), who is accused of the rape and attempted murder of one Reggie Campo (Margarita Levieva).

Roulet swears he is innocent, and says that he is just being set up by Campo, who sees a big payday in her future. Taking Roulet at his word, Haller puts his investigator Frank Levin (William H. Macy) on the job. It doesn’t take long for Levin to find out that Campo is a prostitute. What’s more, he obtains what he thinks is an advanced copy of the DA’s file, to get a jump on what the other side has.

At first, it all looks good for Roulet, but evidence soon appears that starts to raise some big doubts. He might even be connected to another case that Haller is working on. The plot twists start piling on, as we head toward resolution. Saying much more would ruin the movie for you.

A number of good character actors besides Macy are used here, including Bryan Cranston, Marisa Tomei, and Frances Fisher—albeit too sparingly. My guess is that the producers are trying to create a franchise, and if they keep doing what they did here, it works for me.

It’s nice how Haller discovers the similarities between the Campo assault and another case he worked on. Still, how did his ace investigator Levin miss what will be shown to be important details in the earlier case?

A device is used whereby Haller’s car is tracked with the greatest of ease by a motorcycle gang, that is apparently a big repeat client of his. This is cute and all, but defies logic. How can they possibly know where he is going, any time they need him?

We get it. Roulet is a scumbag. But, why is his mother so supportive of him? A couple of scenes of backstory would have helped. The implication is that he was supportive of her after her (otherwise unreported) rape, but who knows?

Overall, the story would have been improved by having the Roulet character be somewhat less obviously EEE-VILLE. Likewise, a later reveal of his guilt would have built up the suspense better than two or three false endings in which we are led to focus on how justice will finally be done.