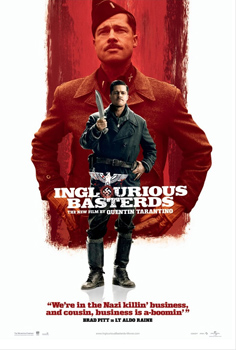 Think of World War II as a film on DVD, with this picture being the alternate ending. As in all Tarantino flicks, when he’s good, he’s good, and when he’s not…

Quite far removed from the action/adventure pic implied by the trailers, Basterds goes in much more for extended dialog, and the building up of tension. Told in five chapters, the first segment introduces us to the real main character, Colonel Landa (Christoph Waltz) arch-villain and Jew hunter extraordinaire, who matches wits with a French farmer he believes to be harboring some Jews. He’s right, of course, and his squad brutally murders all of them except Shoshanna Dreyfus, who barely escapes—and then only because Landa simply does not shoot her, although he clearly has the chance.

The following chapter introduces the Basterds, a group of assassins targeting Nazis headed up by Lt. Aldo Raine (Brad Pitt), displaying a few too many irritating tics throughout the film.

Next up is the chapter where Shoshanna somehow re-emerges in Paris as Emanuelle Mimieux, owner of a small movie theater. She gets plenty of unwanted attention from newly minted German war hero Fredrick Zoller (Daniel Brühl), who is able to arrange that the premiere of a new propaganda film, featuring his story, be held at her theater. Of course, it is ridiculous in the extreme that such a film would even be shown in occupied France, let alone be premiered there, but bear in mind that Tarantino’s vision is for a kind of alternate universe version of World War II, so some of this must be allowed.

When Shoshanna discovers that the entire German high command, including Hitler himself will be at this function (never mind that all this takes place AFTER D-Day), she goes to work planning her sweet revenge. She really gets into it once she finds out that Landa will be handling security. As it happens, though, the Brits have their own ideas. Operation Kino will involve sabotaging the same event, unknown to Shoshanna.

This brings us to a talky sequence set in a French bar, where some of the Basterds are supposed to meet up with British film critic turned commando Lt. Archie Hicox (Michael Fassbender) and a German double agent who will get them into the premiere. From here, things—including the action at the theater on premiere night—do not exactly go as planned, with Col. Landa pulling his own surprise toward the end.

Further elucidation of the plot will reveal too much. Suffice to say that the pic is uneven, and would have benefited from more judicious editing, even if the 2½ hours does not drag.

A few things gave me some pause: Are the clownish portrayals of Hitler and Goebbels meant to diminish the evil of these men, or simply mock them? In a film this long, why are there no character arcs, and why are great character actors like Til Schweiger barely used, while Mike Myers and Rod Taylor should arguably not even be in the movie? Is Tarantino ever going to get beyond the penchant for homage, or what critic Ann Hornady called making “a movie about other movies”?

Best perf without question is turned in by Waltz, who brings Landa to life as a true craftsman and Renaissance man, whose job just happens to be Jew hunter and Nazi thug.

Basterds in enjoyable as a fantasy, but just don’t think about anything too hard.