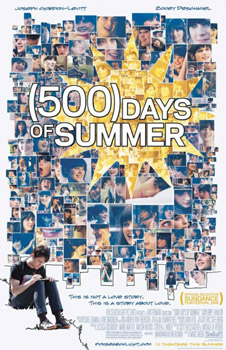 A quirky comedy, praised by nearly all reviewers, who seem to ignore or even miss its many flaws. Pleasant at times, it has been described as a chick flick for guys. A better take would be Debbie Schlussel’s, who notes that the chick part is played by a guy, and the guy part is played by a chick.

Some have accused the film of being a higher budget version of “mumblecore.”

“The tiny/arty film movement known as ‘mumblecore’  has built an entire bemused worldview out of the perspective of overeducated, undermotivated twentysomething guys who can’t commit to a declarative statement, let alone a career or girlfriend.”

The “mumble” part seems to derive from the tendency to include low volume chatter about trivialities between the actors.

We are told by a narrator at the outset that “This is NOT a love story. It’s a story about love.” The story is not presented chronologically, and this provides certain artistic advantages to underscore the ups and downs of the relationship between the two leads. As such, it is hardly a spoiler to reveal that the relationship does not endure.

Tom Hansen (Joseph Gordon-Levitt) works as a copywriter for an Los Angeles-based greeting card company. For reasons not explained, he abandoned his career goal to be an architect. Tom becomes infatuated with his boss’s new assistant Summer Finn (Zooey Deschanel). They begin a relationship, but Summer warns him she does not want to get serious, even as the relationship—by all rational indication—is becoming serious.

On the other hand, Summer will heat up and cool down on a dime, but Tom thinks he can still build something here. Most guys would think otherwise. In fact, beyond her sitcom cuteness, there is not a whole lot to like, but true to the mumblecore credo, it creates plenty of screen angst.

An irritating device is the use of Tom’s much-younger sister, who dispenses advice sounding like a middle-aged voice of experience. This is just more sitcom stuff, along with his cardboard character friends. I could have also done with fewer scenes at IKEA. And what’s up with the weird notion that downtown LA is some sort of paradise, or that a greeting card company would even be located there?

This is helmer Marc Webb’s first feature, coming off much experience with music videos. That’s probably why there is such an emphasis on music (mostly older music) in the story. Much is made, for example, of Tom and Summer’s love of The Smiths, a group that disbanded when they would have been about seven. Similarly, Summer is fixated on Ringo Starr, hardly likely for a current twentysomething.

Particularly grating, though, is the denouement. From out of nowhere, Summer breaks up the relationship, and Tom becomes quite depressed. Some time passes, and he has occasion to see her again. They spend a romantic evening together, and she invites him to a party at her apartment. Thinking they are going to get back together, he has great expectations for the party, only to see her showing off her engagement ring (her fiancé is someone else, of course).

Needless to say, this does not go down well with Tom, who becomes way more depressed than before. He skips work for a few days, then shows up and quits, berating the company for filling its customers with false hopes and dreams. We notice that Summer no longer works at the company. In movie script style, this experience inspires him to get back into architecture, and he puts together a portfolio (of what?). With this, he makes the rounds of various architect firms, with little success. With this plot turn, it is clear that he was already academically qualified, so why he went into greeting cards is a complete mystery.

While sitting on his favorite park bench, he sees Summer, who tries to explain how the woman who never wanted anything serious has become someone’s wife, but the writing here wouldn’t pass muster for a junior high talent contest.

The film ends with Tom waiting for his interview at the famous Bradbury Building (natch). A woman is also waiting to be interviewed, and she has noticed him sitting on that park bench—even if he did not notice her. They agree to have coffee after the interviews, and she seems more simpatico than Summer at her best. Her name is Autumn.

Thus, the best part of the story occurs after the story is over.

So why the critical acclaim? Annie Hall (1977) did this sort of thing (failed relationships) much better, and it is ground that has already been covered far too often. I can only conclude that the critics actually live in a mumblecore world, and like seeing themselves onscreen.