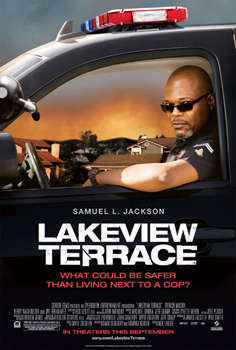 Compelling themes and a strong performance from Samuel L. Jackson propel this one beyond the deficiencies of its third act. Most mainstream critics that didn’t like the pic felt that way because of its far-from-PC take on race—even if there’s much truth in what it portrays.

Young married couple Chris and Lisa Mattson (Patrick Wilson and Kerry Washington) are moving into their first home, in the Los Angeles district of Lakeview Terrace. As next door neighbor and LAPD cop Abel Turner (Samuel L. Jackson) checks out the proceedings, he first sees Lisa, a pretty black girl, with an older man, later identified as her father (Ron Glass). It is only after a few minutes that he realizes that she is married to Chris, and that they are an interracial couple.

While Abel is not too crazy about that arrangement, neither is Lisa’s father, whose relationship with Chris is—to be kind—strained. Still, Abel has plenty of problems of his own, being a widower, and having to raise two kids by himself. This scenario, of course, is a riff on the far more typical black single mother situation.

Abel runs a very tight ship, still haunted by his roots in South Central LA, and wants to keep his kids as far away from that as possible. Naturally, this is resented—especially by his teenage daughter.

Most likely, Abel would have kept his rage over the mixed race couple thing to himself but for their mufky-fufky in the swimming pool one night—in full view of the two kids. This is beyond stupid and irresponsible, but our young couple is not especially remorseful over it. About all that happens that Lisa says that she is “mortified,” with a half smile to her husband.

Now, the battle lines are clearly drawn, even if the Mattsons don’t really want to fight. Abel starts up with a few annoying items, such as security lights that shine right into the couple’s bedroom, and spilling the beans on Chris’ secret smoking habit. When Abel is invited to their housewarming party, he does act somewhat belligerent, but this is mostly in reaction to the PC blandness of it all.

Indeed, the movie has no likable characters, normally a liability, but it works here. Why? Because it makes you focus on the issues, not the personalities.

Lisa is completely vacuous, obviously spoiled by her father, and Chris is a former Cal jock, who dragged her down to LA—supposedly since his company offered him a promotion. Usually, men like talking about their work, but not Chris; and Lisa has some sort of home graphic arts business, that is not defined either. Deep into the second act, she pulls a deception on Chris that would be a deal-breaker for most marriages, but his reaction is strangely subdued.

As the couple’s relations with Abel worsen, it is abundantly clear that part of the problem is that he is a mirror and sounding board, forcing them to examine what it is they actually have together. Meanwhile, Abel’s professional life has hit some bumps, since he is not the good soft PC LA cop that the department would like him to be. Forced to take time off while a complaint against him is investigated, the film plunges into its final act, and goes bad.

I won’t spoil it here, but a far better ending would have been to have the opposite party win. This would have required a move away from turgid melodrama, and, for all I know could have been the script that screenwriters David Loughery and Howard Korder originally came up with.