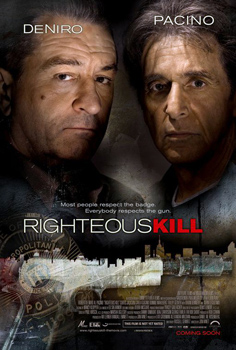 Despite a bad script, less than stellar editing, and too many iconic actors wasted in tiny roles, this pic still is mostly fun to watch, based on the presence of De Niro and Pacino. Some atmosphere is lost with Bridgeport, CT being used—with little success—to portray Manhattan.

Turk (Robert De Niro) and Rooster (Al Pacino) are veteran NYPD homicide detectives, who are looking into a serial killer that specializes in offing scumbags, who have beaten the legal system. The killer leaves a scrap of paper at each crime scene, with a small poem explaining the murder.

Younger detectives Riley (Donnie Wahlberg) and Perez (John Leguizamo) get in on the act, as well, and it is Perez who suggests that the killer is probably a cop. Indeed, at the beginning of the movie, we see Turk in a video apparently confessing to the crimes, but are not sure at that point if the entire film is going to be a flashback building up to the confession, or if there is going to be some twist. There is a twist, but much of the audience will see what’s coming long before it is revealed.

Spicing up the proceedings are sexy crime scene investigator Karen Corelli (Carla Gugino), who likes to have rough sex with Turk. She is also part of two visual red herrings whereby ominous scenes show her coming home alone late at night, and you think she is going to be attacked…but she isn’t.

Two more characters of interest are Spider (Curtis Jackson), a big time drug dealer, and his fancy lawyer client Jessica (Trilby Glover), who goes undercover for Turk and Rooster, much to her own peril.

The story plays out—too slowly—in a disappointing manner, building up to a final confrontation that should have never even made it past the first draft. Add to that a few more plot elements that didn’t need to be there, and it leaves you wondering why the many producers involved did not call in a script doctor.

Some critics are complaining that De Niro and Pacino are too old for this sort of thing, and technically they’re correct. It was pointless to have these two aging stars try to pull off action-type cop roles. Instead, it would have worked much better if they were simply older, wiser, and slower-moving police.

Clearly, this thing got made only because of the two stars, but then, why didn’t they offer any input that could have improved this film? One hopes that De Niro and Pacino are not falling into the pattern set by Marlon Brando and Laurence Olivier, who in their later careers just started showing up in questionable to rotten projects, for a quick payday. Isn’t it also possible to get a reasonably quick payday on a decent movie?