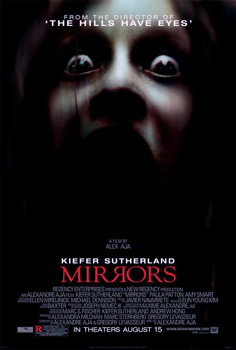 A few jump scares, very brief nudity, a small amount of creative gore, and ominous music do not make up for poor acting, weak dialog, and a running time too long by at least 20 minutes. Based on the 2003 Korean production Geoul sokeuro (Into the Mirror), which also bogged down in the middle, Mirrors went from being the event horror flick of the summer to a dead-time August release, that eschewed pre-release press screenings. Well, technically, there were press screenings, but they all seemed to occur at 8:30 PM on the night before theatrical release—preventing mainstream day-of-release newspaper reviews.

Ben Carson (Keifer Sutherland in full Jack Bauer mode) is a suspended New York City cop, forced to take a job as a night security guard for a shuttered department store. It seems that a horrific fire took place at the giant store a few years ago, and the insurance claim is still tied up in litigation—thus, it has to be preserved for the time being. No word on who’s paying the rent or taxes on this prime piece of Midtown real estate lying idle. The Korean original certainly had this plot point better, as it takes place in the days before the store is to be re-opened after a fire.

Ben is estranged from his wife Amy (Paula Patton), who—inexplicably—must wear the world’s most robust push-up bra for the entire film, so that her exaggerated cleavage becomes an absurd and unwanted distraction. Currently, Ben is living with his younger sister Angela (Amy Smart), and takes some pretty heavy meds to combat his alcoholism.

During his first night on the job, he notices a few disturbing things at the store, including handprints that appear to be coming from behind mirrors, along with images in the mirror that don’t agree with the actual objects in front of the mirror. Worse, he starts seeing strange things in mirrors and other reflective surfaces outside the store.

Soon, we figure out that the set piece at the very beginning of the movie, in which a man seems to be forced by his reflection to cut his own throat, was actually the death scene of the former night security man.

At about this point, Angela shows us why she’s in the movie. She disrobes and steps into the bathtub, although her reflection in the mirror stays in the position of staring back at her in a standing position. And, just like the former night security guard before her, Angela’s image forces her to kill herself by the rather novel method of tearing off her lower jaw, and bleeding to death. Of course, this makes no sense, since she had nothing whatever to do with the goings-on at the store, but what else was the filmmaker to do? It is too early in the movie to kill off the hero, and Amy and the kids are needed for action to follow.

Surprisingly, this shocking event doesn’t put too much of a damper on the proceedings, and Ben is right back at work the next night, trying to figure out how to stop the evil force in the mirror. This eventually leads to him visiting a community of nuns, where one of them just might have the answer.

Then follows the inevitable final battle, and a twist ending that could only work given the constantly changing rules of the mirror world.

It should be pointed out that even if all aspects of Mirrors had been improved, it is still not a horror film at all, but is rather a mystery. Even though nearly all recent Asian horror movies have to do with some object (a videotape, a cell phone, or in this case a mirror) causing the death of someone, and behind it all is a girl with stringy black hair, the ones that succeed are actually scary.

To be scary, a film needs a scary premise, and then must demonstrate it in a way that keeps us on edge. Jump scares are tiresome and don’t do the job.

To be sure, the notion of an evil mirror world could have been scary as Hell, and if done properly would have given viewers chills every time they looked in a mirror—much as many were afraid to take showers after seeing Psycho (1960). Unfortunately, helmer Alexandre Aja was clearly not up to the task.