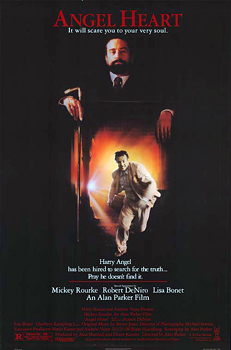 One of the darkest films ever made, this stunner may have been pitched as “noir 1950s detective story meets gothic horror.” While way too much emphasis on a steamy sex scene, that had to be cut to get an R rating, overshadowed its theatrical release, the pic was rediscovered on cable and home video, and has become a cult classic.

The movie opens on the mean streets of New York City, in January, 1955. Low-rent private eye Harry Angel (Mickey Rourke) gets a call from attorney Herman Winesap (Dann Florek) requesting that he meet with a wealthy client later that day in Harlem. The mysterious client is Louis Cyphre (Robert De Niro).

Cyphre and Winesap explain the nature of the investigation: Determine the whereabouts of one Johnny Favorite, a popular crooner before World War II, who obtained some “help” from Cyphre. Apparently, Favorite was injured in the war and also developed amnesia, being cared for at a facility upstate. Cyphre became concerned since he was getting regular reports for years, but they suddenly stopped. There is a matter of some sort of debt, and Cyphre does not want to leave the status of the account in limbo.

With that, Harry departs for Poughkeepsie—the last known residence of Mr. Favorite. When he checks at the care facility, though, he is told that Favorite was transferred out in 1943. Of course, this contradicts what Cyphre told him, and he remarks to the sexy nurse who is pulling the records that the transfer entry in the file, dated 1943, is written in ballpoint—an virtual impossibility. (Ballpoints were not sold in the US until 1945, although they could be obtained earlier in Europe).

Angel gets the name of the now-retired doctor who made the transfer entry, and proceeds to the man’s house for more information. As it happens, the doctor is a morphine addict, who does reveal some information to Harry. Harry wants more, though, and locks him in a room—away from the drugs—to sweat it out for a few hours, in the hopes of loosening his tongue. Harry returns to find him dead—an apparent suicide.

A meeting with Cyphre follows, and Harry, who thought this would just be a missing persons case, wants out. But, Cyphre offers him $5000 and unlimited expenses to keep up the search. How can he refuse?

The trail now shifts to Coney Island, as Angel discovers a woman who knew Johnny Favorite, and mentions a couple of his friends. The friends are down in New Orleans, and that’s where Harry heads next.

Before long, it is quite clear that Johnny and his friends were into some serious Satanic rituals and probably voodoo, as well. Harry interviews both an old girlfriend of Johnny’s, and one of his musical associates, learning more from what they don’t say, than from what they actually tell him. Every new development is more foreboding, leading up to his meeting Epiphany Proudfoot (Lisa Bonet), eventually revealed as the daughter of one of Johnny’s lovers, and a voodoo priestess just like her mother.

The tone becomes ever more dark, as Angel pursues leads against the backdrop of Louisiana bayou country and Bourbon Street. All is explained following an unforgettable cataclysmic sex scene, performed to Lavern Baker’s 1953 classic “Soul on Fire.”

This movie works because of great acting, but more so because of the incredible tableau set by helmer Alan Parker and director of photography Michael Seresin. Even though the soundtrack includes many period recordings, Trevor Jones’ score also contributes to the dark, depressing mood. Of course, none of this could have happened without the source material Falling Angel by William Hjortsberg, reputed to be a whole lot darker than this film!

Mixed in with the foreboding atmosphere are religious themes (Satanism, cultic Christianity, and voodoo), and extreme sexual tension. Indeed, this tension starts with the first female character Angel encounters during the investigation (the nurse at the Poughkeepsie facility) and just keeps building up, until it is “relieved” in the sex scene. And, it must be said, all the bad guys (and gals) definitely get theirs in the end.

Replete with symbolism and plenty of quick cut images, Angel Heart is worthy of repeated viewings, and the Special Edition DVD offers a number of features, including background on voodoo.

« WHAT SHOULD THE FEDS BE SPENDING OUR MONEY ON?–1
MIRRORS »