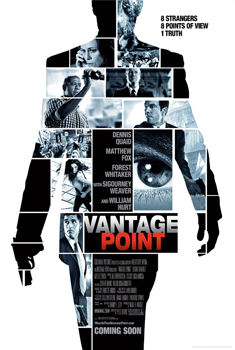 Breathless action featuring a super-intense car chase, with a story told in a non-linear style based on rewinding the action, and replaying it through another observer’s point of view. Just as you’re getting tired of the replays, the narrative moves forward and now includes everyone’s point of view, as we move to the climax. While the plot holes are merely annoying, the ending and its improbable coincidences might spoil the experience for some viewers.

US president Ashton (William Hurt) is in Salamanca, Spain for an international summit on terrorism. Back on duty is Secret Service agent Thomas Barnes (Dennis Quaid), who took two bullets for Ashton six months earlier. The excitement begins almost at once, as the president is shot, followed by two explosions, and mass confusion.

Suffice to say, all is not as it seems, even as Barnes attempts to put together the pieces, with the help of video feed from an on-site TV network and a camcorder courtesy of an American tourist (Forest Whitaker). Throwing in a lovesick Spanish cop (Eduardo Noriega) under the influence of a femme fatale (Ayelet Zurer), and a ringleader who has all the angles covered electronically (Saïd Taghmaoui) spices up the action. Taking perhaps too prominent a place in the proceedings is a little girl (Alicia Jaziz Zapien). Revealing any more story would spoil it.

For the most part, the pic has not been well-reviewed. Some critics are weary of the Rashômon (1950) device of retelling the story through different POVs. Others complain about the non-reality of various plot elements. One big flaw—not heavily commented on—concerns the rather serious time inconsistencies, when comparing one POV to another. It’s one thing to tell the tale in a non-linear manner, but it would have helped if the different POVs all lined up.

As it is, the Rashômon device was probably the best way of presenting the story, since absent that, all the baddies and plot twists would have had to have been revealed in a much less satisfying manner. Still, there was no particular need to hash it out so many times. Notably, this is the first film a quite awhile that identifies the terrorists as Islamists, even if this accomplished with about a one-second long shot showing the wife of one of the perps in a hijab.

The most valid complaints would be that we get maybe 30 minutes of actual story in our 90 minute running time, and everything comes down to a bloodthirsty terrorist finding a conscience, exactly when the story needs it. Bear in mind, though, that at least since the scarecrow let go of the rope holding down Professor Marvel’s balloon in The Wizard of Oz (1939), plot holes and suspension of disbelief have been staples of the cinema.

Enjoy Vantage Point for the action and the pace—just try not to think too much.