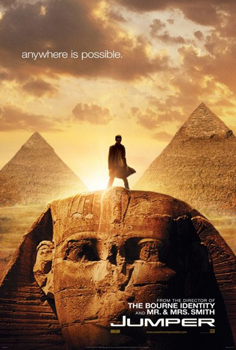 How do you take the compelling premise of teleportation, spend gobs of money to bring it to the silver screen, and end up with—at best—a lackluster showcase for mediocre special effects? Well, one way would be to get three guys to collaborate on a script that rips the life out of the original property; direct the scenes featuring the protag and his girlfriend to bring out the worst perfs from already poor actors; and slash/burn-edit the pic in a manner to destroy narrative and even common sense.

Jumper is very loosely based on Steven Gould’s novel, that tells the tale of young David Rice (Hayden Christensen), who discovers that he has the ability to teleport. David’s home life is far from enjoyable: His mother left when he was five, and he gets to live with an abusive and alcoholic father (Michael Rooker) in Ann Arbor, Michigan (changed inexplicably from the book’s mythical Stanville, Ohio).

David’s first teleportation or jumping experience in the book is an escape from yet another beating from the father to the safe, familiar, and comfortable surroundings of the public library—clearly a haven for the boy. In the movie, though, David ends up in the library after falling through the ice to retrieve a snow globe for his girlfriend, hurled there by a thuggish school mate, that should have broken upon impact anyway. Unfortunately, he brings lots of water with him, but no reason is proffered as to why he would have ended up in the library, of all places.

David realizes that jumping is the ticket out of his rotten life, and before long ends up living large, courtesy of being able to enter and exit bank vaults at will—to say nothing of the ultimate love ’em and leave ’em scenarios, portrayed in PG-13 style. Alas, if it seems too good to be true, it is, in the form of Roland (Samuel L. Jackson)—mysterious leader of the Paladins. The Paladins have been killing jumpers since medieval times, either because they all eventually go bad, or shouldn’t have the power in the first place—or something.

The Paladin angle is probably the dumbest change from the book, that had David being chased by the NSA. The Paladins have all kinds of high-tech goodies to defeat the Jumpers, and are shown actually killing one caught in the jungle. The real Paladins were chamberlains in ancient Rome, and were later high officials in the Catholic Church, the latter duty being a possible explanation for Roland’s line that “Only God should have this power.”

Meanwhile, David feels that it is a good time to head back to Ann Arbor and look up Millie, the girlfriend (Rachel Bilson). Bear in mind that he disappeared from town eight years earlier, and is presumed dead, yet Millie not only warms up to him right away, she agrees to drop everything and take a little Roman holiday with David—using conventional means of travel.

When in Rome, at the Colosseum no less, much exposition breaks out in the form of a Paladin attack on David, along with the introduction of Griffin, a more experienced jumper (Jamie Bell). David and Griffin will team up to defeat the Paladins, presumably in time for the sequel, set up as it is by David’s mother (Diane Lane) appearing at the end.

Pared down to a merciful 88 minutes, about all Jumper brings is quick action and a good perf from Bell, with Jackson phoning it in and still coming out better than all but Rooker.

The main source material Jumper was first published in August, 1992, and gained some notoriety by having David’s second jump occur as he is about to be savagely raped by a group of truck stop perverts. Oddly, this sequence could have been handled far more discreetly, and it makes you wonder about Gould, especially since the book was targeted to kids. His blog has fairly shocking grammatical and spelling errors for a published author, along with some pointed inconsistencies.

He links to a negative review of the film from Salon‘s James Hannaham, and suggests that Hannaham read the book, implying that he might like it better than the movie. Yet, in response to criticism that the movie ruined the book, he goes off in multiple directions to defend the film—his best reason being that it will make him more money. And, he displays a T-shirt given to him by relatives with the message “Never judge a book by its movie.” This is as close as he gets to knocking the film.

He does blog that, “I’ve now seen the movie three times….I can’t really predict how it will do. Reviews have been mixed tending to negative but I’m not sure how deserved they are. You will have to make up your own mind.”

Okey-dokey. The T-meter on rottentomatoes.com gives the film an awful 16% rating. Here’s a sample…