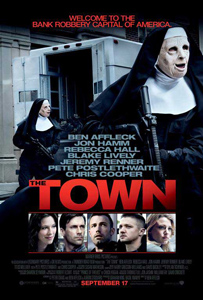 This intense crime drama offers plenty of thrills, but suffers from significant plot holes and unlikely character development. A rewrite is more than indicated here, and one wonders why it never happened.

An opening title card tells us that the Charlestown neighborhood of Boston is home to most of the perps who are responsible for the more than 300 bank robberies that occur in Boston every year. Just to put things in perspective, based on FBI statistics and extrapolating to the end of 2010, the number would actually be around 80 for the entire state of Massachusetts. For what it’s worth, this “home of bank robbers” image is probably 15 years out of date.

As the pic opens, a crew of Townies (as the neighborhood residents call themselves) is over in Cambridge to rob a bank. The band is headed up by Doug MacRay (Ben Affleck), and includes his hot-tempered and doped-up best friend Jem (Jeremy Renner), along with ace driver and hot-wire wizard Gloansy (Slaine), and alarm hacking expert Dez (Owen Burke). They are outfitted with masks and automatic weapons.

Even though the heist seems to produce plenty of cash, and everyone inside the bank is cowering on the floor, Jem believes that the manager has activated the silent alarm, and beats him severely. In fact, the alarm has been activated by the assistant manager Claire Keesey (Rebecca Hall), although the perps are unaware of this. Nevertheless, Jem takes her hostage and blindfolds her, even though they have never taken hostages on any previous jobs.

After the crew drives around for awhile, they let her go. Subsequently, the gang splits up the money, which includes a large share for local crime boss Fergie (Pete Postlethwaite). It is at this point that they examine Claire’s ID, which they grabbed, and note that she also lives in Charlestown. Jem wants to kill her, but Doug says he will take care of things.

Meanwhile, FBI special agent Frawley (Jon Hamm) has already interrogated Claire, who tells him that she has been threatened, and the gang knows where she lives, so she is reluctant to cooperate. Soon after, Doug encounters her at a laundromat, and even though she has had a harrowing experience just a few days earlier and starts weeping, agrees to have a drink with him. Of course, she has no idea who he really is.

Reluctantly, Doug agrees to pull an armored car heist in Boston’s North End, and the crew makes good its escape despite the narrow streets, and the pursuit of a dozen or more police vehicles. Although they get the money, this one does not go smoothly, producing several casualties. Further complicating matters, Doug and Claire fall in love.

As you might imagine, Jem is furious upon hearing this, and not only because this will surely compromise the crew. Jem’s sister Krista (Blake Lively) was once Doug’s girlfriend, and still pines away for him, but she is a drug-addicted single mother, and Doug is definitely not the father. Not exactly a tough choice between her and Claire, for our hero.

In the third act, the ante is upped even more, as Fergie forces Doug to participate in a more-than-ambitious heist at Fenway Park, by threatening to harm Claire—as well as Doug. This will all play out amid much violence, with a few unexpected turns.

The biggest single flaw in the movie is the character of Doug. The writers aren’t sure whether he is a more gentle version of Jem, or just as violent with a nicer facade. By the same token, it makes little sense that Claire would still carry a torch for Doug after he has revealed himself as the gang leader.

Just as inexplicable is the loyalty shown to autocratic and sadistic crime boss Fergie. It must be nice to sit around and “plan” the heists, while others risk life and limb, and then be able to collect a huge share. What’s more, the crew is not exactly living high on the hog, despite their history of bank jobs.

Although it is necessary to propel the plot, the romance between Doug and Claire is unmotivated, and there is zero chemistry between the two. The meet cute at the laundromat is stupid, since Claire is a “tunie,” local slang for a yuppie, and would no doubt have laundry facilities in her apartment building.

The contrast between Claire and Krista is exaggerated beyond reason, to almost the level of a parody. Frawley is able to use Krista’s jealousy to foil the Fenway heist, but it is unlikely in the extreme that Jem would have confided so many details to his sister.

Against all odds, Doug and Jem are able to escape from the Fenway crime scene, but Jem, disguised in a police uniform, is made almost at once. Strangely, Doug—similarly attired—is not spotted, and once again can successfully flee the scene.

Somehow not appreciating that this would implicate Claire, Doug leaves her a large amount of cash from the Fenway job, which she then uses to make an “anonymous” donation to fix up a local hockey rink. Presumably, with her inside knowledge of banking, she can pull this off and not endanger herself. With the money, he also includes a clue to where he is headed. But, come on! The FBI will be watching her for the rest of her life.

A far better ending would have had the Fenway job foiled, based on a tip from Doug to Frawley, with the last scene showing Claire visiting Doug in prison, serving his five year or so shortened sentence. The writers want you to believe that he is too much of a stand-up guy to do this, but will just the same whack Fergie and his triggerman Rusty shortly after the Fenway heist. He is certainly smart enough to know that the Fenway caper is so risky that his friends would be better off if the job were short-circuited.

Finally, for a film that lavishes us with such details as to how the crew sanitizes their crime scenes with bleach, it is remarkably sketchy on how Doug can elude detection and establish a new life for himself.

More than that, recall that Fergie forces him to do the Fenway job by threatening him and Claire. But, just before this scene Doug tells Claire that they should leave for Florida straightaway. Good idea. Why didn’t they do this? Fergie admitted that without Doug there would be no Fenway heist, so he wouldn’t be endangering his friends.