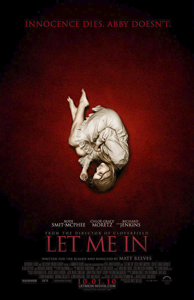 A creepy, yet bittersweet riff on the vampire legend, presented as a teenage revenge fantasy. The pic touches on many themes, but is markedly inferior to the original Låt Den Rätte Komma In (Let The Right One In—2008).

The original film was set in suburban Stockholm, Sweden in the winter of 1982. Here, the scene changes to the US of course, but is set in a wintry Los Alamos, New Mexico, also in 1982.

As the movie begins, an ambulance speeds toward the hospital, and a man is brought in, who is badly disfigured from acid burns. A cop (Elias Koteas) wants to interview him, thinking he might be able to shed some light on a recent rash of murders. However, the man can’t speak, so the cop leaves him a pad and pen.

The cop walks back to the nurse’s station, and he is told that a few minutes ago a young girl came to visit the man. Suddenly, they hear a scream from the ICU and the man has jumped out the window to his death. He leaves behind a note that says: “I’m sory [sic], Abby.”

Owen (Kodi Smit-McPhee), a lonely 12-year-old boy, is introduced. His parents are separated, and although he is living with his mother in a nondescript apartment block, she neglects him, and seems to be drinking all the time. He notices that a young girl of about his age and her father are moving into the next-door apartment. Strangely, the girl is walking barefoot in the snow.

At school the next day, we see that he is mercilessly bullied by Kenny (Dylan Minnette) and his friends. No doubt, the bullying is made all the worse since Owen makes no attempt whatever to fight back, or even restrain his cries of pain.

That night, he goes out to the apartment’s courtyard and engages in a mock knife attack against Kenny, with a convenient tree taking the punishment. The new girl Abby (Chloe Grace Moretz) is also in the courtyard, and sees this. She asks him what he is doing, and he replies “Nothing.” She says that she can’t be his friend and departs. Later, he notices her father (Richard Jenkins) outside.

We now focus on the father, who attacks a random victim, and brings him out to the woods. Using equipment he had brought along, he hangs the man upside down from a tree branch, cuts his jugular, and arranges a jug to collect the blood. However, he hears someone coming and in his haste to flee, overturns the jug and loses most of the blood.

The father returns home empty-handed to Abby, who is now revealed to be a vampire, and he to surely not be her father. She berates him for screwing up, saying that now she will have to “do it herself.” And, do it herself she does. Acting like a hurt little girl, she lures in an unsuspecting victim, and takes in her fill of his blood. Showing what must be her idea of mercy, she breaks his neck so he too won’t become a vampire—and a competitor.

The next night, Owen and Abby are again in the courtyard, and she notices an injury that he admits came from classmates. She says he has to fight back and fight back hard. She asks him if he likes her and he says “Yes.” But then she asks him if he would still like her if she weren’t a girl. While he is pondering this, he hears his mother call him in for dinner.

Meanwhile, the “father” is looking for another victim, but really botches things this time, and must use the acid he always carries with him to disfigure his face, precluding easy identification. He thus becomes the victim from the beginning of the film.

With the “father” out of the way, Abby and Owen grow very close, and all indications are that he will become her new protector and companion, but there are still a few things to take care of…

The story is unique and compelling, and that was ample reason for the American remake. Helmer Matt Reeves plays it pretty close to the Swedish original, but the changes he does make are not improvements. One example is the completely pointless opening scene, which anticipates the basic story’s unfolding by two weeks. Another is making the mother a drunk and an apparent religious fanatic.

One more are the TV snippets of Ronald Reagan including his speech “America is good, and if America ever ceases to be good…” Then, there’s the setting of Los Alamos, no doubt a facile attack on nuclear weapons—or something. I guess by Reeves’ reckoning, Owen’s problems are compounded by America being a nuclear power, and having Reagan as president. In the original, Owen was simply neglected by his separated parents. No need for the alcohol or religion, unless this too is part of Reeves’ simplistic attacks on contemporary American society.

Worse, though, is Reeves not developing the androgynous nature of Abby. After all, she did ask Owen if he would still like her if she weren’t a girl. In the original, she is revealed to have no pubic organs, and in the book she is actually a pre-teen boy who was castrated by the vampire/master who originally bit him. Adopting the persona of a 12-year-old girl became a better way for “her” to get along in the world.

So, what appears at first blush to be an odd, if bittersweet, case of puppy love is—upon reflection—something much darker. How low can Owen’s spirits have dropped to choose a life with Abby? Consider that he will be the homosexual platonic companion of a vampire, and must be a relentless serial killer, as well. “Nihilism” is not a strong enough word to describe such hopelessness.

We can only speculate how many Owens and “fathers” Abby has already had, and how many are still in her future, to say nothing of the countless innocent victims of her blood lust.