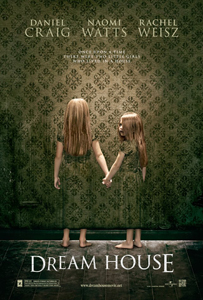 Panned by most of the critics, this movie is a riff on the typical “Honey, we’ve bought a haunted house” scenario. Apparently, the studios took over production, much to the chagrin of helmer Jim Sheridan and the stars. Then again, perhaps it should have been pulled from the director.

As the pic opens, NYC publisher Will Atenton (Daniel Craig) is going through the process of voluntarily leaving his job, to spend more time with his family at his recently-purchased rural home (Ontario, Canada filling in for Connecticut), and finally finish his novel. His wife Libby (Rachel Weisz) and young daughters are happy to see him, and look forward to having him around the house.

However, this domestic bliss is short-lived, as the girls see a prowler in their yard, and Will discovers goth teenagers performing a ritual in their basement. The goth kids are surprised to hear that Will knows nothing about the brutal murders, which occurred at the house five years earlier.

Will probes for more information and finds out that a mother and her two daughters were killed, with suspicion falling on the father—but there was insufficient evidence to charge him. What’s more, this father—Peter Ward—has just been released from a mental institution, and is said to be back in town.

Making matters worse, Chloe (Rachel Fox)—a girl from across the street—tells Will’s girls that “Everybody who lives in this house gets killed.” Will complains to Chloe’s mother Ann (Naomi Watts), who is not particularly friendly to him.

She has her own problems, with a bitter custody dispute on her hands, but later warms up to Will. Meanwhile, as Will makes further inquiries, he begins to realize that all is not quite as it seems.

Ironically, a big spoiler is provided in the film’s trailer, whereby it is revealed that there is no Will Atenton.  “Will” is actually Peter Ward drifting into an imaginary identity he developed to ease the pain of the loss of his family.

Peter was put away, not so much as a killer, but as a complete wreck—reacting to his loss. In occasional lucid moments, he sees that the dream house is abandoned and vandalized, but also sees the ghosts of his family.

It would appear that the original story got changed, explaining the murder of Peter’s family as a paid hit gone terribly wrong. Since this is the real plot twist, maybe the studio figured that it had to give away the “Will is Peter” bit in the trailer. I guess too many twists are difficult to follow.

I’m not sure about the auds, but the critics have a great deal of trouble following the storyline of many films. If you don’t believe me, try watching a movie with a complicated plot, and then read some online reviews—even by the so-called elite critics.

Many reviews ask how a “talented” director like Sheridan could have come up with what they call such a mess, and then blame the studios for ruining everything. The fact is that Sheridan is greatly overrated. Check out my review of his awful In America (2002).

A better story would have come up with a more sensible reason for the homicides, possibly having Peter really commit them, and being able to completely fool the public. Otherwise, the pic has its moments, and certainly does not deserve all the negative press.