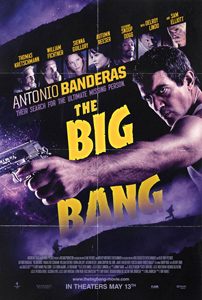 Regular readers of this column know that I am no big fan of movie critics. It is quite clear that the vast majority of them don’t work terribly hard at their “craft,” and tend to have prefabricated, fixed opinions on most aspects of cinema. To show their supposed sophistication, they know just which names to drop and which obscure films to cite in in their reviews.

Perhaps most maddeningly, they often don’t understand the events unfolding on the screens before them, and get major plot details wrong. If this is a genuine occupational hazard of seeing hundreds of movies per year, then they owe it to us to work to avoid it. After all, they ARE professionals, right? Would we excuse a sports writer such flaws?

I offer the above as a prelude to my review of The Big Bang, a film almost universally panned by the critics, and misunderstood by them to the same degree. The pic is a sort of neo noir, with numerous riffs along the way that poke fun—with all due reverence—at the conventions of the genre.

Ned is reluctant to take the case, but the money is impossible to turn down. More than that, he is falling in love with the subject of his quest, à la Laura (1944). After some false starts in Los Angeles, the action shifts to San Celeritas, New Mexico, and an encounter with eccentric billionaire Simon Kestral (Sam Elliot), who has built a linear accelerator below the desert floor, in search of the so-called God particle.

In the meantime, a mysterious black car is tailing Ned, in search of $30 million worth of diamonds connected to Protopov.

All will be revealed against a backdrop of brilliant production design, and a host of character actors including William Fitchner, Delroy Lindo, Thomas Kretschmann, Bill Duke, Snoop Dogg, and Jimmi Simpson. Saying anything more will ruin it for you.

Check this one out.

« US WOMEN LOSE TO JAPAN IN WORLD CUP
CONTAGION »