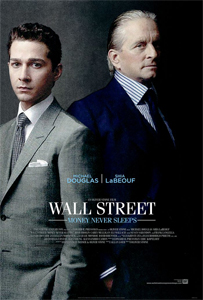 Now here’s a great idea. Do a follow-up to your own 1987 moderate hit Wall Street, against the backdrop of the 2008 financial meltdown, and above all, bring back Michael Douglas as Gordon Gekko. How can it miss?

For starters, helmer Oliver Stone can’t seem to decide whether he wanted to make a financial market manipulation thriller, or a treacly relationship picture. Worse, the protags of the relationship are miscast, with the female lead also written as unlikable and unbelievable. Add to that a sentimental ending that seems to have been tacked on after a test screening, and this movie is nowhere near as good as it could have been.

The pic opens with Gordon Gekko claiming his personal effects, as he leaves prison in 2001. Gekko had done an eight-year stretch for insider trading and other financial misdeeds. No one is there to meet him at the prison gates. O How the Mighty Have Fallen, I guess, but no point in lingering on all that, as we jump forward to 2008.

We are then introduced to our young protags, Jacob “Jake” Moore (Shia LaBeouf), and his girlfriend Winnie Gekko—as in Gordon’s daughter—(Carey Mulligan). Gordon is on the TV hawking his new book Is Greed Good?, and this upsets Winnie, since she hates her father for, among other things, supposedly “causing” her brother to die from a drug overdose.

Jake is a hotshot trader at investment banker Keller Zabel, while Winnie works for a Leftist blog. The firm’s namesake, Louis Zabel (Frank Langella) is Jake’s mentor, and out of the blue gives him a bonus check for well over a million bucks. Zabel is clearly disillusioned with the business and wonders out loud, “How do you make money on losses?”

Good question, but that doesn’t explain how alleged maven Zabel got his own firm into big trouble. Thanks to rumor-mongering and some quick plays by shark Bretton James, (Josh Brolin), Zabel’s firm goes down the tubes. Soon after, Zabel offs himself by stepping in front of a subway train. Jake is unaware of James’ involvement at this point.

A few days later, Jake goes to a lecture given by Gekko, and afterward introduces himself as the man who will marry his daughter. The two of them fashion a deal whereby Jake will help Gekko get back with his estranged daughter, while Gordon will find out exactly who was responsible for Zabel’s downfall, and how to exact revenge.

Even though the third act will disappoint many viewers, Stone keeps up the pace, and you really don’t notice the 2 hour and 13 minute running time. On the other hand, you will notice several pointless detours from the main story.

Douglas, of course, turns in the best perf. Langella has his moments, as does Josh Brolin. Susan Sarandon aces the inexplicable role of Jake’s mother. There is almost no chemistry between LaBeouf and Mulligan, but that’s not the only problem with those two.

Given her hatred of her father and everything he stands for, why in the world would she take up with essentially Gordon Gekko, Jr. in Jake? By the same token, we have no reason to believe that the young Jake is such a mastermind—beyond reminiscences from Zabel claiming that he was analyzing markets when he was 12.

It should be a joy to see nonagenarian Eli Wallach as the wise old I-banker Jules Steinhardt, but the dialog given him—featuring bird noises (no kidding)—is ludicrous.

If it comes as a surprise that Gordo put aside $100 million in a Swiss account for Winnie, it defies all logic how she gives it up.

Finally, Stone would have been better served to lose the obvious visual symbols of kids blowing bubbles, the repeated views of the Manhattan skyline, and the overbearing 80s soundtrack.