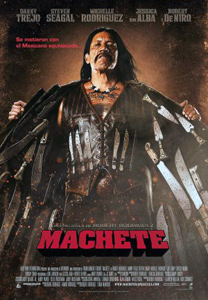 This over-the-top revenge fantasy is loaded with cartoon violence, nonstop action, and a surprising amount of big-name talent. But the ham-handed politics and racial undertones will be enough to turn off some viewers. Supposedly, the pic started off as a joke trailer, included in Grindhouse (2007), but since the movie got made, I doubt that it was really a joke at all.

As the story begins, Machete (Danny Trejo) a Mexican federale and his partner are headed at high speed to make an important bust. His boss warns him to wait for backup, but of course he doesn’t, and instead walks right into a vicious trap. He is forced to watch drug lord Torrez (Steven Seagal) murder his wife, and is left for dead.

Somehow though, he survives, and makes it across the border into Texas, where he is soon discovered by a sketchy businessman named Michael Booth (Jeff Fahey) and Luz (Michelle Rodriguez), a charismatic woman who runs a taco truck .

Booth gives him $150,000 to assassinate an anti-immigrant state senator (Robert DeNiro), but Machete is just the fall guy. In fact, an assassination attempt has been orchestrated, to galvanize sympathy and support for the senator, who is currently running for reelection. Machete evades the police, being helped by the Network—a group set up to help the illegals. Luz is soon revealed to be the leader, and wants Machete to play an active role. He already gave Luz the $150,000.

Machete is game, but first needs to seek his revenge against Booth and Torrez.

Needing a bargaining chip, Machete kidnaps the two women, but not before he gets into their video. He turns the incriminating border videos over to ICE agent Sartana Rivera (Jessica Alba). Booth ups the ante by killing Machete’s priest brother (Cheech Marin), and all this drives us toward the climactic battle between the Network and its supporters, and self-styled border enforcer Von Jackson (Don Johnson) and his minions.

On one level, Machete is pure comic book entertainment, replete with memorable lurid images. While most of them depict ultra violence, most guys will also recall the matching boobie shots of Lohan and Marek.

On another level, though, there is more than enough pro-illegal agitprop, and it’s impossible to ignore, even if some critics including the NY Times‘ Stephen Holden would rather that you just laughed it off. But, how can you laugh off outrageous nonsense such as the Network needing its own doctors, since illegals are turned away from hospital emergency rooms?

A few commentators have complained that the Anglo women (meaning April and June) are portrayed as idiotic sluts, while the Latinas (namely Luz and Sartana) are heroic and virtuous. Point well taken, except one could also argue that this bespeaks a matriarchal bent, and that isn’t necessarily a good thing. In any event, there were plenty of Mexican women hanging around Torrez, and I doubt that their virtue was maintained.

Any more analysis of this pic is unwarranted. Enjoy it for the thrills, and move on.