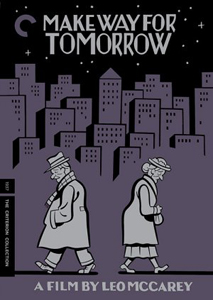 This vastly overrated clunker fooled everyone except its original theatrical audience. The pic bombed on release, but wowed the critics at the time, right on down to the present day. Despite its many glaring flaws, which quite literally turn it into a parody of itself, you will search the Web in vain to find anything other than stellar reviews. Orson Welles himself was taken in, claiming that “It would make a stone cry.”

The movie opens as a family reunion is occurring at the home of elderly Barkley “Bark” Cooper (Victor Moore) and his wife Lucy (Beulah Bondi). The time is 1937, close to the height of the Great Depression. A quick exterior shot portrays a more than decent-sized home.

Bark, a bookkeeper by trade, tells the gathered clan that he was laid off four years ago, and has been unemployed ever since. He and Lucy have burned through their savings, and the bank will be foreclosing. One of the sons asks how much time they have, and Bark speaks of a six-month notice, only to then reveal that the time is up in a few days.

As it happens, none of the kids has sufficient space to accommodate both parents, or so they say. Thus, Lucy is sent to live with the eldest son George (Thomas Mitchell), his wife Anita (Fay Bainter) and their teenage daughter Rhoda (Barbara Read) in New York City. Meanwhile, Bark goes off to an unnamed rural location, some 300 miles from New York, to be at the home of daughter Cora (Elizabeth Risdon) and her husband Bill (Ralph Remley).

Nellie (Minna Gombell), another daughter, makes up a variety of excuses why she can’t help out at all, and a third daughter Hattie is way off in California, and beyond reach—at least for the moment.

Lucy must share a room with her granddaughter, and this becomes a big hardship for the youngster. In fact, Rhoda complains to her mother that she is so embarrassed by Lucy that she can no longer have her friends come over to visit. However, this is not borne out by the events on the screen.

Worse, though, is the contrived situation that occurs as Lucy interacts with a high-class bridge instruction seminar run by Anita at their New York apartment. Clearly, Anita is teaching these classes to bring in some extra money, and her students are all well-heeled and quite sophisticated.

Inexplicably, Lucy—who is neither senile nor nasty—interrupts the proceedings by placing a squeaky rocking chair right in the middle of the living room. Later, the phone rings, Anita answers, and it is Bark wanting to speak with Lucy. Even though this will surely be disruptive as the phone is also in the living room, Anita hands it over to Lucy, who speaks in an obnoxiously loud old-fashioned “long distance” voice.

Of course, Anita is embarrassed by this, but since she could have just as easily have told Bark to call later, can hardly blame Lucy. Yet, she does. Moreover, Anita also holds Lucy responsible for not being able to monitor Rhoda’s dates anymore, since none of the men come to the home.

We are being set up to see how selfish Anita is, but the circumstances are so contrived that I’m sure audiences weren’t buying it in 1937, either. It doesn’t help that all of this “action” unfolds at a glacial pace.

Meanwhile, Bark has little to do at daughter Cora’s home, so he spends most of his time at the store owned by Max Rubens (Maurice Moscovitch). Moscovitch offers the movie’s best performance, and is also part of a scene that simply defies explanation.

Rubens is well aware of the forced separation of Bark and Lucy and their tenuous finances, and offers a made-to-order solution. Mr. Hunter, a wealthy lawyer, is looking for a couple to act as permanent caretakers for his nearby farm, and upon Max’s recommendation, Bark and Lucy could get the job. Even better, they could live there—rent-free—for the rest of their lives.

Incredibly, Bark turns him down flat. More on this later.

As events play out, Lucy is headed to a home for elderly women. (I guess that there aren’t any homes for elderly couples in New York.) Based on catching a cold (no kidding), Bark is scheduled to be sent off to Hattie’s in California, and its more “healthful” climate. Presumably, the children will be paying for Lucy’s care.

Feeling a wee bit guilty, though, the siblings arrange for a reunion dinner at the New York apartment of George and Anita, where Bark and Lucy will say their (likely final) good-byes. Bark arrives in New York several hours before the dinner, so he meets Lucy, and they return to the hotel where they spent their honeymoon 50 years earlier.

Bark must have plenty of pocket money now, because he orders drinks for himself and Lucy at the hotel bar, where everyone is nicer than nice to them (as opposed to their rotten kids). The couple is having such a great time that they decide to blow off the family dinner, and eat instead at the hotel’s fancy restaurant. In keeping with this fairy tale portion of the story, they are comped on the dinner as well as the drinks.

The film ends at the train station, where Bark is headed off to California, and Lucy must return to George’s apartment until she is put in the home—although Bark knows nothing of this.

There is much wrong with this flick…

Why on Earth did Bark turn down the caretaker job? Tellingly, that scene, which completely destroys the premise of the entire “sad” story, is never mentioned in any of the reviews.

It is difficult enough to accept that a bookkeeper could be unemployed for four years during the Great Depression, but it is beyond reason that a bookkeeper would keep on spending like there’s no tomorrow under those circumstances.

Any number of stupid throwaway lines could be mentioned, but this one was especially absurd: Bark explains that he no longer has a particular book since it was taken away when the bank foreclosed. I was unaware that any bank would bother to hold such personal items as collateral. How did the couple end up with anything more than the clothes on their backs?

Perhaps the worst travesty, though, is the ending. After a glorious day in New York City, where they profess their mutual love, Bark has no problem whatsoever leaving Lucy to fend for herself, as she watches his train depart. Contrary to all normal human experience, there was not a single conversation whereby the couple discussed other possible solutions—anything to stay together.

Given the miserable story, the acting is serviceable. Ironically, Victor Moore was known primarily as a comic actor, and the incongruous light tone he brings to the film helps make it endurable.

I suspect that the mythology surrounding “Tomorrow” is due in large measure to the revisionist posturing of the movie as an argument for Social Security. But then, Social Security was also overrated.