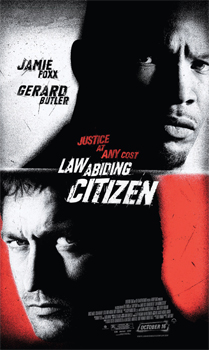 This revenge fantasy—missing a hyphen in the title—is mostly exciting, although it suffers from a less than inspired perf from its top-billed star, and has a few too many plot holes. Several scenes are so over-the-top that they are clearly being played for laughs, even if several critics didn’t seem to notice.

Clyde Shelton (Gerard Butler) is a normal family man, at home with his wife and young daughter, awaiting a pizza delivery. When he answers the door, though, he lets in a pair of vicious home invasion robbers, who end up knocking him out and killing his wife and child. All this happens before the opening credits.

Nick Rice (Jamie Foxx) is an ambitious prosecutor, trying to protect his near perfect conviction rate, and thus cuts a deal with one of the perps to testify against the other. Only the audience knows that Rice cut a deal with the wrong guy. Even though this gives one of the offenders a death sentence, the other gets off with third degree murder, and will be out of prison in a few years. Not surprisingly, this does not go over well with Shelton.

We are now placed “ten years later.” The unlucky perp is about to be executed via lethal injection, and this is witnessed by Rice, his assistant, and the somewhat sleazy defense attorney who represented Darby, the lucky perp. When what was supposed to be a painless experience proves to be anything but—much to the horror of those present—and Darby’s body is found in numerous pieces a short while later, the trail leads to Clyde Shelton.

Shelton mocks the judge during his trial (the same one who presided over the home invasion crew), and gets put in jail pronto. However, that does not stop him from killing more people connected with the crime and its inept prosecution.

Shelton is then identified as a clever tech wizard, who specialized in killing people remotely. As the informant tells Rice, “If Clyde wants you dead, you’re dead.” How he is able to handle all this while in prison is revealed toward the end, and may disappoint.

In the hands of a better director, writer, and a better Nick Rice, this could have been a far superior film. Still, some themes are presented, and are worthy of further thought…

What does happen to justice, when it is in the hands of ambitious careerists? Many on the government side are all for civil rights until their own ox is gored; then their attitude changes considerably. No doubt, the civil rights theme is why the lead had to be a black prosecutor. Interestingly, Rice is saddled with a shrewish wife, who can’t quite seem to understand that when one is working on a capital murder case, he may not be able to attend his daughter’s cello recital.

Nick’s assistant (Leslie Bibb) wonders aloud whether all the long hours and sacrifices are worth it. The movie would indicate that they are not worth it.

As the body count rises, and fear supposedly grips the city (although everyone killed is connected with the original crime and prosecution), the mayor (Viola Davis) channels Star Trek’s Captain Kirk by making impossible demands and expecting a highly volatile situation to be eliminated, just because she says so. This is cartoon leadership, and is clearly being ridiculed.

While no masterpiece, Law Abiding is faring worse than it should at the hands of the critics, who are taking it all way too seriously, and venting their liberal consciences against such vigilantism and mayhem. I guess they think the system works, except when it convicts one of their favorites, or catches a predator fugitive after many years.