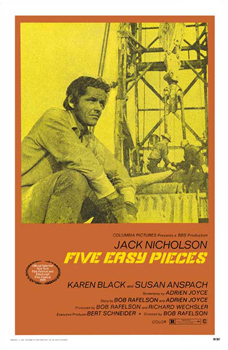 Critically acclaimed at the time, this is the movie that made Jack Nicholson a star. Called “slow” by many—especially in retrospective reviews—that may not be the best adjective. In truth, there is little story, and no big character arcs.

Pic opens in a Bakersfield, CA oil field, where Bobby Dupea (Jack Nicholson) and Elton (Billy “Green” Bush) are employed. After work, Bobby heads back to a modest home, where he lives with girlfriend Rayette (Karen Black). Rayette is obsessed with Tammy Wynette, playing her records constantly, and singing along. Bobby, as we will soon discover, is a classical pianist of some repute from a wealthy family, and Rayette sees her vocal “talent” as a way to keep up with him.

In fact, it is clear that this relationship is nothing more than an arrangement of convenience. Rayette is a waitress, and Bobby likely met her in the restaurant. She was attracted to him as a steady worker, with perhaps more class than the typical oil patch guy, while Bobby didn’t mind the companionship. Beyond that, they have nothing in common. Rayette is determined to “Stand By Her Man,” in the best Tammy Wynette fashion.

Bobby finds out from Elton that Rayette is pregnant (or at least claims to be) prompting Elton to suggest that he do the right thing, and settle down with her. Elton notes that having a child worked for him. At this, Bobby has an epiphany:

“It’s ridiculous! I’m sitting here, listening to some cracker as***le compare his life to mine! Just keep telling me about the good life, Elton, if you want to see me puke my lunch!”

Bobby quits his job, and heads down to Los Angeles to meet his sister Partita (Lois Smith), in a Hollywood recording studio. Partita—also a pianist—tells him that their father suffered two strokes, and probably doesn’t have much longer to live. She begs him to return to the family compound in the San Juan Islands (Washington state) before it is too late.

Bobby agrees, no doubt thinking that this would be a great way for him to leave Bakersfield and Rayette behind. He returns to the little home they share figuring he need only pack and make good his escape. Sentimentality, though, gets the better of him, and he agrees to take Rayette along—an idea he will soon regret.

Now, the movie enters its road picture phase. Bobby picks up a lesbian couple, whose car had broken down. Soon after, the four of them try ordering lunch, thus launching the famous (if overrated) “chicken salad sandwich” scene. All Bobby wants is an omelet with an order of wheat toast, but inexplicably, it only comes with a roll or English muffin.

The waitress (Lorna Thayer) seems to take pleasure in refusing Bobby’s simple request. He tries reasoning with her, in that since they make sandwiches and have a toaster, they should easily be able to comply. She does offer to let him speak to the manager, but he tries one final gambit. He adds a chicken salad sandwich on wheat toast to the order, and asks her to hold everything except the toast, charge him for the sandwich, and there should be no problem.

The waitress will have none of it, and replies: “You want me to hold the chicken.” Now, knowing that his effort is futile, Bobby answers back, “Yeah. I want you to hold it between your knees.”

This causes the waitress to point to the “We reserve the right to refuse service to anyone” sign, and she asks the party to leave. Bobby responds, “You see this sign?,” and clears off the table, full of glasses of water right onto the floor. Although this episode seems to impress the lesbian couple, Bobby notes that it did not help him get what he wanted.

Back in the car, Palm (Helena Kallianiotes)—the butch member of the couple—drones on and on, and they are finally dropped off, as Bobby nears a motel on the mainland, where Rayette will stay until she hears from him, as he continues on to the ferry and the family home.

Bobby arrives and is greeted by Partita, cutting the hair of their father, who sits there expressionless, in a wheelchair, unable to speak or even move. We also meet Bobby’s supercilious older brother Carl (Ralph Waite) and his fiancée Catherine (Susan Anspach). There is immediate chemistry between Catherine and Bobby, who, after some sparring, make love when Carl is away. They plan to get together the next day, and this is the only time in the film that Bobby seems happy. That will be short-lived, as on the next day, Rayette appears at the house, having taken a cab.

Not surprisingly, this leads to a tense dinner, and Bobby retreats to the mainland to get drunk. On his return, he tries to re-up with Catherine, but she gently blows him off, saying that it would not be fair to Carl, and adding:

“I’m trying to be delicate with you, but you’re not understanding me. It’s not just because of Carl, or my music, but because of you. I mean, what would it come to? If a person has no love for himself, no respect, no love for his work, his family, his friends, something… How can he ask for love in return? I mean, why should he ask for it?”

Bobby then wheels his father out onto the grounds for an emotional farewell. The two have been estranged for some time, and reconciliation is not possible. The monologue ends with: “The best I can do, is apologize. We both know I was never really that good at it, anyway…I’m sorry it didn’t work out.”

The next morning, Bobby and Rayette leave. In the car again, Rayette becomes more nauseatingly clingy than ever, and Bobby looks lost. They pull into a gas station next to a roadside cafe. Rayette wants a cup of coffee, and asks Bobby for a little money, so he hands her his wallet. Bobby heads for the men’s room, and stares at himself in the mirror, trying to figure out what to do.

He leaves the restroom, and talks to the driver of a large truck (we see this only in a long shot with no dialog heard), apparently telling him that he lost his car and luggage in a fire, and convinces the driver to take him north. The driver agrees, and Bobby climbs into the truck, leaving his car, wallet, jacket, and Rayette behind.

While much was made at the time of Bobby typifying some sort of disaffected 1970s anti-hero, his main problem is that he simply expects too much, and is unable to deal with the real world. Tired of his pretentious family and sheltered upbringing, he leaves that behind for a blue-collar world, only to be put off by its lack of sophistication. But then, in returning to his original environment, he finds Catherine, who is little more than a cultured version of Rayette, with none of the fidelity.

After all, Catherine seems quite pleased to live off Carl, and will likely have many more tawdry affairs along the way. Her rejection speech to Bobby sounds plausible, until you remember that she barely knows the guy. Rather, it is convenient psychobabble. If Rayette thinks she is Tammy Wynette, Catherine imagines herself as some 19th century prodigy, kept by an ardent male admirer.

It is only at the conclusion of the story, that Bobby realizes he is better off eschewing the conventional completely, as he heads north, presumably to Alaska, and a new beginning among other free spirits. Who knows? He could always play piano in a remote honky-tonk.

« IS THAT MEDICAL DEVICE SAFE AND EFFECTIVE? WHO KNOWS?
CLUELESS: FRANK DONATELLI EDITION »