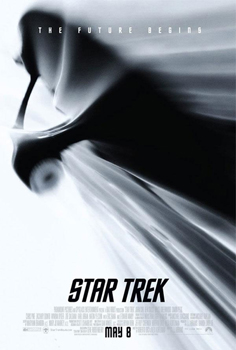 Virtually non-stop action, loads of CGI, a slight bit of humor, and a weak story combine to reboot (as all the crix seem to be saying) this franchise from the 1960s. Completely absent, by the way, is any of the humanism so favored by proud atheist series creator Gene Roddenberry.

The pic begins with an attack by renegade Romulan and less-than-savvy time traveler Nero (Eric Bana) on the Starship Kelvin. Captain Robau (Faran Tahir) agrees to meet Nero on his ship, putting George Kirk (Chris Hemsworth) in charge. Giving us the first indication of time travel and Nero’s asynchronicity, the villain asks Robau about the location of an Ambassador Spock. But Spock is unknown to the Captain, and with good reason: Nero, coming back from the future, has picked the wrong year. At best, Spock would only be a few years old.

Frustrated at this turn of events, Nero kills the captain, whose vital signs are being monitored from aboard the Kelvin. No attack is possible on Nero’s advanced ship, so acting Captain George Kirk orders an evacuation. The evacuees include his very pregnant wife, but George goes down with his ship, allowing it to collide with, and destroy Nero’s—thus saving most of the Kelvin’s crew.

George Kirk’s son—born on the escape vehicle— is, of course, James Tiberius Kirk. We also see the early childhood of Spock, the half-human/half-Vulcan. Spock becomes the first Vulcan to refuse a prestigious academic assignment (as a reaction to what he perceives as an insult toward his human mother), opting instead for the Star Fleet.

Likewise, smart-ass and womanizing Jim Kirk is talked into joining the Star Fleet by charismatic Captain Pike (Bruce Greenwood), of the Enterprise.

Spock (Zachary Quinto) and Kirk (Chris Pine) do not exactly get along too well, especially after Kirk rigs a program to solve the supposedly unsolvable Kobayashi Maru problem, designed by Spock. Kirk is accused of cheating by Star Fleet, and he responds that the problem itself is a cheat, in that it cannot be solved. However, in the midst of this debate, all cadets are called into service, responding to a distress call from Vulcan.

Kirk finds himself black-balled from active duty pending the outcome of the inquiry, but is smuggled aboard the Enterprise by his friend Bones McCoy (Keith Urban). There, he, Spock, Sulu (John Cho), and Uhura (Zoe Saldana) team up for the first time.

Kirk sees that the distress call is anything but, and is really a trap. Captain Pike eventually agrees with him, but it might be too late. He has to board the same Romulan ship as did Captain Robau, leaving Spock in command.

How all this plays out is the subject of the rest of the film, which includes a cameo by Leonard Nimoy as an elderly Spock, or “Spock Prime.” While Nimoy’s presence is welcome, there is also some gimmick casting, including Winona Ryder as Spock’s mother and Tyler Perry as big shot Admiral Richard Barnett. Simon Pegg does well as chief engineer Montgomery ‘Scotty’ Scott, while Anton Yelchin as Pavel Chekov is mostly annoying. Apparently the writers are unaware that the “V” consonant is used extensively in Russian, so Chekov is comic relief, as he struggles through many English words.

Despite several emotional and gripping moments, the story is not terribly satisfying, but the movie has been praised to the hilt by nearly everyone. Full disclosure: I was never a big fan of the series. Rather than real science fiction, at best it was mostly dimwitted speculations on the order of “Imagine a world in which…”

We can end by quoting Roddenberry: “We must question the story logic of having an all-knowing all-powerful God, who creates faulty humans, and then blames them for his own mistakes.” Evidently, God was quite kind to Roddenberry, for despite all the faults of his (Roddenberry’s) creation, he saw little blame, and earned great wealth—story logic or not.

« HARDING: THE PRESIDENT WHO UNDERSTOOD HOW TO FIGHT AN ECONOMIC DEPRESSION
ENVIRONMENTALISM GONE BAD OR WHERE THE REGULATORY MOVEMENT HAS GONE »