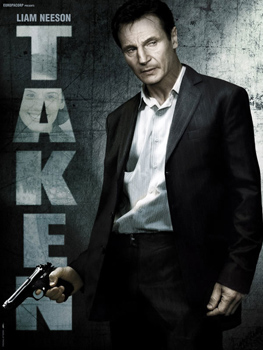 An 80s style action film (light on the SFX and high-tech), which only fails in the family interest portions. Fortunately, those are few and far between. The plot holes fly by in most cases, owing to the fast pace.

Former CIA operative Bryan Mills (Liam Neeson) left the agency to be closer to his teenage daughter Kim (Maggie Grace), now living in Los Angeles with her mother Lenore (Famke Janssen) and wealthy stepfather Stuart (Xander Berkeley). One of his former agent pals fixes him up with a bodyguard detail for a famous singer, and when he saves her life, it’s clear that even though Bryan is retired, he has not lost a step.

Soon after, Lenore pressures him to sign off on a European trip for Kim, and he does so against his better judgment. Upon her arrival in Paris, Kim and her friend Amanda (Katie Cassidy) are spotted at the airport by a white slave ring, and are abducted from their apartment.

Bryan must rely on all his skills to find her, since his CIA buddies figure out that the ring is run by Albanians with extensive international ties, and the girls will disappear within about 96 hours.

Using one of Stuart’s private jets, he gets to Paris, and goes into full kick-ass mode, relying only a bit on a former colleague from French intelligence. What he uncovers is seamy as Hell, but also makes plenty of money for all involved, including head slave trader St. Clair (Gerard Watkins).

Helmer Pierre Morel keeps the excitement going with almost no letup until the very end.

Most reviews of the pic have been favorable, but those that were negative tend to focus on the plot holes or the “racism” or stereotypes they see with respect to the bad guys. Some even object to the europhobic tone of it all. The stereotype argument is dangerous, because it would suggest that the only acceptable villain is a young white guy from middle America. As to the plot holes and related difficulties, Kyle Smith’s review for the New York Post is especially negative, but he does make at least two unassailable points:

The fights and chases are so scrambled that it’s hard to figure out basics such as where objects are in relation to one another. Which of the many white SUVs at the construction site is Bryan driving? Where are the other SUVs? Never mind – what I really want to know is, where do the bad guys get these bullets that, when fired at the driver-side window, shatter the glass but stop before reaching the driver’s head?

Attacks on the nature of the plot (not on its flaws) seem to miss the boat. The whole white slave thing is simply a set-up for around 80 minutes of action. What’s the point of looking any deeper in a film like Taken?

Or as Sigmund Freud once said,” Sometimes, a cigar is just a cigar.”

« HOPE AND CHANGE
NOT QUITE UNSUNG, BUT STILL A LESSER-KNOWN HERO »