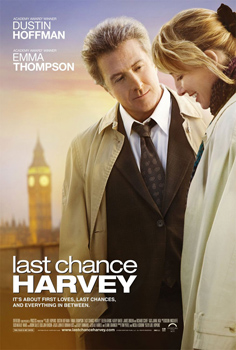 A simple story, plenty of outdoor London scenes, and good perfs by the two leads make this one a pleasant diversion. Sure, there are some flaws, but in films like this—where you want to be charmed—you don’t care.

Harvey Shine (Dustin Hoffman) is traveling to London for the wedding of his estranged daughter Susan (Liane Balaban). Upon arrival at Heathrow, he is understandably tired, and blows off airport survey taker Kate Walker (Emma Thompson). When he gets to his hotel, he finds out that he is the only one in the wedding party staying there. Nonetheless, he tries to be of good cheer at the rehearsal dinner, where his outcast status is made even more obvious when Susan tells him that her stepfather (James Brolin) will be giving her away at the wedding.

Meanwhile, Kate is out on a blind date, and her own outcast status is underscored when friends of her date show up at the pub, and a good time is had by all (except her).

Determined not to attend the wedding reception, and given the very real excuse of protecting his job as a jingle writer by saving a big account, Harvey plans to return to New York right after the ceremony. As it happens, though, he misses the flight, and upon notifying his boss of this, is fired.

At this, he heads to the airport bar and quickly downs a couple of drinks, before noticing Kate, sitting a few feet away. He approaches Kate with the idea of apologizing for treating her rudely the previous day, and then explains what has happened to him in the last few hours. She wants no part of it at first, but the conversation continues, and they begin walking around London. Clearly, there is an attraction, but Kate—who has been hurt before—tries to ignore it.

During their stroll, Kate tells Harvey that he really must go to the reception, and he replies that he will, but only if she accompanies him. There are some bittersweet moments as the rest of the plot plays out but—rare for this genre—there are no big character arcs for anyone.

Since the plot is so thin, a couple of devices are added, with little effectiveness. Moreover, there is no back story as to just why Harvey is the family black sheep, or why the wedding of two Americans would be held in London, for that matter. With not much to go on, we get the impression that Harvey’s situation might have been catalyzed by his snobbish ex-wife (Kathy Baker), who expected way too much of her musician husband—and her daughter simply followed suit.

Or maybe, Harvey’s sensitive nature is what gets him in trouble. At any rate, I would disagree with those critics who portray both Kate and Harvey as losers.

The title refers to a conversation with his boss, who tells him that this is his “…last chance, Harvey.” Older people need love too.

« WHO COULD BE AGAINST SAFER PRODUCTS FOR CHILDREN?
HOPE AND CHANGE »