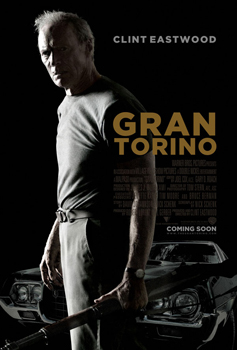 Helmer/star Clint Eastwood plays the tough guy once again, working with a fine screenplay by Nick Schenk (based on a story by Dave Johannson). Gritty urban scenes, a bitter old-timer thrown into a multiculti world he dislikes, and the eponymous car are all important elements of this film—one of this year’s best.

Retired autoworker and decorated Korean war veteran Walt Kowalski (Clint Eastwood) is at his wife’s funeral, and we are introduced to his greedy sons, and obnoxious grandchildren. There’s clearly not much love lost here, and the phenomenon is hardly recent. Once visitors have left his house at the end of the post-funeral festivities, we see Walt interacting (not positively) with his Hmong next-door neighbors.

It is soon apparent that the teenage son and daughter are trying to avoid the path of their cousin—a gang member—who keeps trying to recruit the boy Thao (Bee Vang), and never has a good word to say about the girl Sue (Ahney Her).

The fatherless Thao finally succumbs to the pressure, and tries to steal Walt’s prized 1972 Gran Torino, but the old guy foils his attempt. Soon after, the Hmong gang harasses Thao again, and eventually the entire household joins in the fight, but this time the melee is broken up by Walt. At that, he is regarded as a hero by his Hmong neighbors, who load him down with food and gifts.

Walt does not want any of this attention; however, he is charmed by Sue, and comes over for a barbecue. As the relations between Walt and his neighbors warm up, the family offers him the services of Thao, in reparation for the attempted car theft. Gradually, Walt takes a liking to the boy, eventually getting him a construction job. All the while, though, the gang is never far away.

At some point, Walt realizes that he has more in common with this Hmong family’s values than with his own offspring, and does develop a genuine fondness for Sue and Thao. Still, we know that tensions are building, and something bad is going to happen.

A young priest (Christopher Carley) plays an increasing role as the story unfolds, with Eastwood the enforcer adopting a novel strategy to clean things up.

The story was originally set in St. Paul, MN—home to an established Hmong community—but was presumably shifted to Detroit as a more known auto manufacturing hub. As it happens, there are few Hmongs in Detroit, and no Gran Torinos were actually built in Detroit—belying Walt’s claim that he personally fashioned the one in his driveway.

Refreshingly non-PC, except for not mentioning Detroit’s overwhelming problems (that would surely be on Walt’s mind), the movie is decidedly not anti-White, as is touted by some. Rather, it speaks all too clearly of American culture rot, and one unlikely source of redemption.

Perfs by most of the novice Hmong actors are admirable, and there is barely a wasted frame in the entire pic. What few negative reviews there are take exception to Walt’s character arc, and seem to be truly shocked at the racism—as if the real world resembles the sheltered existence of these critics.

« THE TWELVE DAYS OF CHRISTMAS
96 YEARS AFTER THE 17TH AMENDMENT: MISSION NOT ACCOMPLISHED »