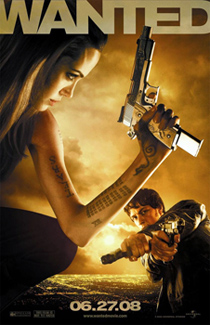 Full of intense CGI action, but plagued with a poor story, this film could have been much better if overpraised Russian helmer Timur Bekmambetov had contributed a single original idea. Calling this one The Matrix (1999) meets Fight Club (1999) is accurate, but would give the impression that Wanted is a whole lot better than it really is.

Wesley Gibson (James McAvoy) is a loser in a dead-end job, with a girlfriend who cheats on him with his best friend. We get the picture right away, and it is ironic that for all Bekmambetov’s quick cuts and breathtaking action, he spends way too much time to establish this. Wesley seems to be harassed at work all day long by his supervisor Janice (Lorna Cross), but considering that all she wants are the reports that he is supposed to be preparing—and seemingly never delivers—you wonder how he can even keep this job.

To make matters worse, Wesley can only cope with his life by taking large amounts of anti-anxiety pills, thus setting up the meet not cute between him and an assassin named Fox (Angelina Jolie), while he is in line at a pharmacy. Fox and Wesley are being attacked by turncoat assassin Cross (Thomas Kretschmann), setting up a CGI car chase shootout.

After saving the day, Fox explains that she is a member of an ancient group of assassins called the Fraternity, that gets its kill orders from Fate, woven into fabric at their textile mill. (No, I’m not making this up.) She introduces Wesley to Sloan (Morgan Freeman), a leader of the group, who tells Wesley that his father was one of the greatest assassins, but was recently killed by Cross. Thus, he is being recruited to assassinate Cross, after undergoing rigorous training.

A training montage from any of the Rocky pics would have been far more artful than what we are given here. Mostly Wesley gets beat-up, and then miraculously heals in the paraffin baths that speed up the process. Along the way, he learns to channel his high adrenalin state so that he can stop time in his mind, and figures out how to make bullets travel around corners by sheer will. (This might be a useful skill, but how do you aim the gun at a target you cannot see?)

At last Wesley is ready to go after Cross, requiring a trip to eastern Europe. Well, actually he isn’t, since Fox has to save his butt, but no matter. This leads to another CGI sequence—easily the most laughably fake in the movie—concluding with a train careening off a railroad bridge.

A bit more plot unfolds, leading up to the big reveal, which I won’t give away, but think Luke Skywalker and Darth Vader. The trouble is, the plot twist makes no sense for a number of reasons, and sinks an already very weak story. Still, the door is left open for a sequel. I suppose another good thing is that James McAvoy is no longer typecast as a romantic lead.

And speaking of McAvoy, his last film, Atonement (2007), went through a great deal more story before it self-destructed with its big reveal. I’ll say this: Wanted was a far less boring experience. As it is, both movies fooled most of the critics. [Atonement with 83% on the Tomatometer and 75% for Wanted.]

As they say, De gustibus non est disputandum or, there’s no accounting for taste.