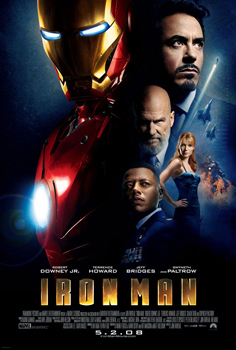 Great FX, a compelling story, near-perfect editing, and above all fine acting propel this pic to be easily the best Marvel adaptation yet.

The film opens on a Humvee in the wilds of Afghanistan, containing some soldiers, and our hero Tony Stark (Robert Downey, Jr.), billionaire defense contractor. The group is on its way back to base, after a successful demonstration of Stark’s new Jericho missile, but gets intercepted by rogue Afghan forces.

Stark is captured, and is nursed back to health by captive doctor Yinsen (Shaun Toub), for the express purpose of making a Jericho missile for the baddies. Tony is shocked to find that these insurgents have no shortage of bona fide Stark weapons and parts. Tony and Yinsen work together on something all right, but it is not a missile. Instead, Tony has fashioned his first Iron Man suit, and it functions well enough to allow him to escape.

He returns back to the US, greeted by personal assistant Pepper Potts (Gwyneth Paltrow), and top Stark Industries exec Obadiah Stane (Jeff Bridges). Immediately, he calls a press conference, and suggests that his time in captivity will drive the company in new directions—as in de-emphasizing weapons production, and going whole hog on developing his arc reactor—a marvelous new power source.

Not surprisingly, Wall Street does not take kindly to this new direction, as established in a cameo by Jim Cramer, playing his manic self. Nor does this sit well with Obadiah, who clearly has plans of his own.

Tony is advised to stay out of the public eye for a bit, and starts working on a new and improved version of the Iron Man suit, while warming up to Pepper. Many have noted that Paltrow has never looked better on screen, by the way.

The plot will thicken considerably, affording many opportunities to show off the FX. My favorite involved the holographic stuff going on as Tony designs the new suit. Some comic moments include an overachieving robotic device, and a guaranteed method to avoid collateral damage in hostage situations.

Critical reaction has been mostly positive, with some snipes at how the story is too predictable, or how the Americans are tritely portrayed as heroes, and the religious motivation of the baddies is hidden. Of course, some of these critics are so intent on discovering an esoteric deep meaning that they forget that we are talking about a comic book story here.

Even in movies that probably DO have more depth, the sophomoric hyper-analysis can be astounding. Indeed, you only have to read the self-indulgent drivel that tainted many reviews of Cutter’s Way (1981), a cool nouveau noir film, that also featured Jeff Bridges. While set in Santa Barbara, the pic could have been based anywhere, yet hapless fans had to read about “a meditation on the death of the California dream.”

Some of the crits need to get over themselves, along with a goodly percentage of sports commentators.