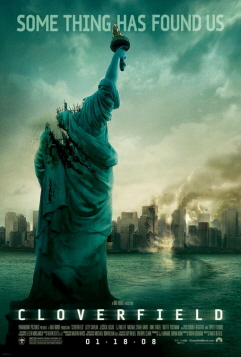 Some genuinely tense moments have to compete with outlandish plot elements, crummy dialog, and less than stellar acting, in a pic that is better than merely Blair Witch Project meets Godzilla. Still, as crit Peter Travers notes, “Hot damn, what it might have been.”

We begin at a surprise going-away party for New Yorker Rob (Michael Stahl-David), all set to take a big job in Japan. Through way too much ultra-superficial conversation, we find out that Rob and Beth (Odette Yustman)—friends forever—finally consummated their relationship. But afterward, Rob apparently was not attentive enough, so Beth shows up at the party with a new boyfriend.

Meanwhile, Rob’s best friend Hud (T.J. Miller) is drafted to video the proceedings, and that includes wedding reception type testimonials from all the guests, including Marlena (Lizzy Caplan—with the film’s best perf). After several minutes of disjointed video panning around the party, a giant shock like an earthquake startles everyone. This is followed by all sorts of incredible destruction, and the group ends up on the street only to see the Statue of Liberty’s head fly down a few feet from them. Hud, of course, is recording everything, and we see this in shaky, shaky handheld mode.

Although at first blush Liberty’s severed head is a cool image, the scale seems off. More than that, how did the monster (soon to be introduced, if not clearly shown) get this object to fly well over three miles? Perhaps he snapped it off in a fit of pique, somehow knowing it to be iconic to the city he was attacking, and carried it with him, so that he could then toss it into the SoHo neighborhood.

At any rate, we’re now in full panic mode, with all the partygoers trying to get off Manhattan, until Rob picks up a cellphone message from an injured and trapped Beth, and thus decides to head back in the other direction to rescue her. His friends try to talk him out of it, but he is determined. A few of them join him in his quest.

Along the way, they must dodge the monster—hundreds of feet tall—and fight off the assistant monster crab creatures, against a backdrop of near-constant military fire. As it happens, Beth’s apartment building is partially destroyed, so Hud whimsically suggests that they climb the stairs of an adjacent building, and somehow cross over to her 39th floor residence. The desperate Rob and company pursue this insane course, and sure enough, they can get to her place.

Beth is mighty glad to see them, and now the plucky band must make their way to the final evacuation point before 0600 hours. At this point, we get some better glimpses of the monster, who boasts a human-like head and lots of tentacles, although he also appears to be bipedal. Mostly, he’s real big, and likes to destroy property and eat people, and is bulletproof. Heck, he’s probably nuke-proof.

Since the framing device for the movie is that Hud’s video footage is found by the military, it is no spoiler to mention that there is no happy ending here. Cloverfield is the code name for the evacuation op.

One more touch—either bittersweet or icky depending on your saccharin quotient—is that this very video was filmed over one of Rob and Beth in happier times, with bits of the earlier one peeking through at times.