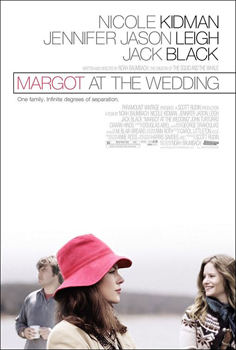 A few interesting themes cannot make up for this seriously flawed mess of a movie. Bereft of sympathetic characters, the story—such as it is—portrays no character arcs, and also violates the Aristotelian three act dramatic structure: Although Act One does introduce the characters and establish the conflict, there is no Act Two deepening the conflict, nor any Act Three resolving it. The best way to think of it is as a prolonged Act One, which simply ends as the idea runs out.

To some, of course, this might give helmer and writer Noah Baumbach more indie cred, but the truth is, he just botched it. In fact, it is painfully obvious that the 91 minute running time resulted from slash and burn editing, required to render the pic watchable at all. As such, details can be easily missed, a condition hardly helped by the dreary, dark cinematography.

Margot Zeller (Nicole Kidman) and her androgynous son Claude (Zane Pais) are heading from Manhattan to the Hamptons, to be at the wedding of her sister Pauline (Jennifer Jason Leigh). Margot is a literary figure of some repute, but seems to be best suited to dishing out criticisms of everyone and everything—a goodly number of which are plain stupid. Perhaps the best example of which is her put-down of a neighbor girl’s brainpower, only to be told by her son that the girl was early accepted to Harvard.

Margot’s reply is to the effect that idiots get early acceptance all the time. Riiiiight.

One big target of Margot’s wrath is Malcolm (Jack Black), the slacker engaged to Pauline, deemed to be unworthy of her. Clearly, Malcolm is meant to be the comic and sympathetic figure here, but an absurd plot twist near the end strips him of much sympathy. Searching for a character to root for leaves us with Claude, but he is so weak and sissified—likely because of Margot’s smothering influence—that our pity finally turns to disgust.

While Pauline is hoping for a reunion with her estranged sister, it is soon revealed that Margot’s main reason to visit is not the wedding at all, but a chance to rendezvous with Dick Koosman (Ciarán Hinds) an oily fellow, who collaborated with her at one time. Fair enough, but in this film, chock full of astonishingly bad writing, the would-be affair is mangled quite badly.

The pair go from public cuddling to Dick asking Margot to slip off with him for the night, to her inexplicably refusing to do so, whereupon he insults her at a bookstore interview the next day. And, the way she is broken down by his silly (if successful) attempt to throw her off during the event belies any claim she may have to the slightest amount of poise or intellectual wherewithal. Unfortunately, this is just one of many scenes crying out for a rewrite.

Pauline and Malcolm are living in the old family abode, and a large oak tree as well as feral neighbors figure into the proceedings. I suppose that all this is to indicate some conflict between “nature” and their literary pretensions, but Baumbach does little more than to demonstrate that Margot, Pauline, and company are self-absorbed, and have far too high an opinion of themselves.

Some critics note that Kidman’s well-publicized plastic surgery is disturbing and distracting here, but it seems to work in crafting her character, and building out her Johnny-one-note performance. On that subject, the movie’s best perf belongs to Hinds, but that is surely affected by its small size, and therefore the shortage of crummy lines.

Black is miscast, but was probably brought in to sell this project as a comedy. Remarkably, a number of critics bought into that ludicrous concept. The only comedy here is that this wretched thing got made in the first place.