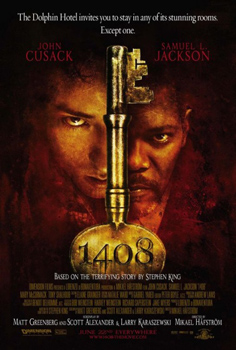 Critically overpraised Stephen King adaptation has a decent first act, but then falls apart trying to create scares. The resolution—such as it is—is confusing at best. No doubt, the mainstream critics loved this pic since it contains no gore, but this exercise in psychological horror is all psychological and no horror.

Mike Enslin (John Cusack) is a writer whose best years seem behind him. In the wake of the death of his young daughter Katie (Jasmine Jessica Anthony) and split from his wife Lily (Mary McCormack), he has carved out a profitable hack niche churning out travel guides covering allegedly haunted hotels and inns. Of course, there is no shortage of material given the innkeepers’ desire to publicize their establishments, even if the hauntings are all bogus. Anyhow, this enables Enslin to live in Hermosa Beach, surf, and be cynical and atheistic.

Then, he hears about the Dolphin Hotel in Manhattan, by way of a mysterious postcard, warning him not to stay in Room 1408. Since the saga of 1408 would be the perfect ending to his next book, Mike arranges a stay, although it takes the threat of a lawsuit to accomplish this.

Upon his arrival at the Dolphin, hotel manager Gerald Olin (Samuel L. Jackson), does his best to try to convince Mike to abandon the idea, but fails. Supposedly, no guest has survived in the room for more than one hour.

Enslin enters 1408, and it appears innocent enough, but suddenly the clock radio starts up by itself, with 60 minutes of music (“We’ve Only Just Begun” by The Carpenters) counting down the time to oblivion. As we said, this is all good, but the cliché “scares,” replete with blood on the walls (The Shining, anyone?) and the radio continuing to play even when unplugged, may elicit more laughs than screams.

In the suspension of disbelief department, we have an upscale hotel keeping a death room intact, along with the notion that a civil rights lawsuit could really open up availability. Couldn’t the room always be undergoing renovation, for example? More than that, we are given no explanation whatever as to the origin of the room’s malevolence other than Olin’s remark that it is an “evil f___g room.”

Tired filler material includes Katie coming back from the dead, a vision of Mike’s sickly old father, and flashbacks of marital discord. I haven’t read King’s short story, but if the movie is true to the source, then Stephen baby really phoned this one in.

FX are very good, as is the music and acting. Heck, all that’s missing is a story.

Maybe the critics also like that you can read so much into the proceedings. Is this all in Mike’s mind? But, if it is, then how do you explain the 50-plus deaths in 1408? Is this all divinely inspired to get Mike and Lily back together?

Finally, let’s consider the business aspects for a moment. What is the demo for this flick? That large unreached mass of folks who want a horror movie with no horror beyond stock chills? Were the producers pandering to a female element with the relationship aspects and the gushy Carpenters music?

Being raised in LA, I always heard that it’s difficult to get a film made, and to not bother submitting a synopsis or treatment full of clichés, even if there might be big names involved. Of course, I also heard William Goldman’s line, “Nobody knows anything,” regarding the ability of supposed industry gurus to predict success or failure.

Sadly, 1408 is much more a case study of today’s movie business, rather than a horror film.