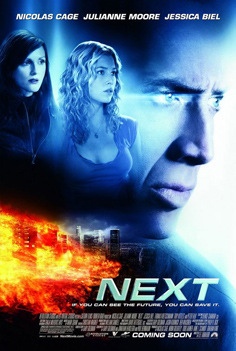 Cris Johnson (Nicolas Cage) has the ability to see into the short-term future, and this is usually limited to a two minute window. Realizing that making this gift too public would subject him to all sorts of problems, he is living his life as a small time magician in Las Vegas, supplementing his income with mostly inconspicuous casino winnings.

Unfortunately for Cris, he has been found out by FBI agent Callie Ferris (Julianne Moore), who wants to employ his talents to foil a dire terrorist plot involving the detonation of a nuclear device. But Cris doesn’t think that he can help, inasmuch as a two minute glimpse into the future clearly limits his effectiveness, and the only future he can foresee is his own. Despite Ferris’ best efforts, Cris gives her the slip.

Besides, he has been employing his gifts overtime in an attempt to win the affections of Liz Cooper (Jessica Biel), his dream girl in more ways than one: Somehow, his visions about her can extend well beyond the two minute limit. Playing out various scenarios in his mind, he determines that his best course with Liz is to save her from a restaurant confrontation with her former boyfriend, not by beating him up, but rather by letting the guy paste him in the mouth.

Now bonded with Liz, he uses the ruse of his car being stolen to hitch a ride with her to Flagstaff, Arizona. A stop along the way includes an Indian reservation where she teaches, providing some nice Grand Canyon scenery.

Agent Ferris hasn’t given up on Cris, and tracks them to a motel, but then so have the terrorists, who recognize that Cris could really trip them up. Continuing what is rapidly becoming a Hollywood tradition since 9/11, movie terrorists are never Islamist fanatics, but instead are Eurotrash baddies, who seem to hatch their plots for no other reason than they are evil—or something.

Ferris has to enlist the aid of Liz to get to Cris, but her plans come to naught until Liz is kidnapped by the bad guys. Now, Cris will have to cooperate.

Somehow—in one of the story’s biggest plot holes—the FBI determines that the nuclear device will be detonated in Los Angeles, so our save-the-world team hightails it to the City of Angels for the ultimate showdown.

In one of Cris’ visions, Liz is killed on the roof of a building, so he works his way back, tracing the license plate of the vehicle that brought her there. This leads to a massive shootout, and the end of the movie—if not the end of the story. Suffice it to say that interacting so much with the future can change it, but not necessarily in the way you intended—sort of a riff on Ray Bradbury’s The Sound of Thunder. Audiences may not be thrilled with the outcome.

As to the source material, Dick’s 1954 story The Golden Man does indeed have a character Cris Johnson, but he is a mutant in a post nuclear war America. Yes, he can see into the future, but this is emphasized as the ability to see all possible outcomes from any single action (and this does occur in the movie). Interestingly, the protags of the story are an agent of the DCA, a government group created to get rid of the mutants, and his wife. In effect, Cris is the bad guy.

Cris is captured all right, but not executed, since the DCA wants to study him. They don’t realize, though, that he has another power: With his golden skin (hence the title) and perfect physique he is able to seduce women, and this allows him to eventually escape. More than that, the DCA fears that normal mankind is doomed given the emergence of the mutants and their superpowers, whereby animal instinct will triumph over intelligence.

I think that sticking to the source material would have made a better pic. Heck, they could have even thrown in some action stuff to liven it up. But you couldn’t get away from the rather dark possibility of the human race disappearing in favor of the mutants, and that surely would have gone over even worse than the mediocre film that is Next.