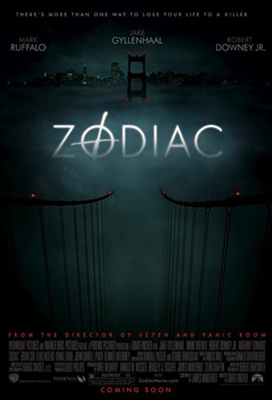 A very deliberate study of the infamous northern California case, which was never officially solved, is also a bravura screen portrait of obsession. Based on Robert Graysmith’s books Zodiac (1986) and Zodiac Unmasked (2002), the pic combines a police procedural with newsroom action, even featuring a score by David Shire, who did All the President’s Men (1976).

The movie begins with the July 4, 1969 killing of two Vallejo teenagers, and follows the case as cryptic messages are sent by the self-proclaimed Zodiac, to Bay Area newspapers. The case hits San Francisco proper with the killing of a cab driver.

Graysmith (Jake Gyllenhaal) is the San Francisco Chronicle‘s new cartoonist, and he takes an immediate interest in the investigation, becoming friends with ace crime reporter Paul Avery (Robert Downey Jr.) and frenemies with lead detective Dave Toschi of the San Francisco PD (Mark Ruffalo). It is said that Toschi was the inspiration for Dirty Harry (1971), Bullitt (1968), and Inspector Steve Keller of the 1970’s TV series The Streets of San Francisco, but he comes off in this film like a poor man’s Columbo, right down to the too short trench coat.

Still, the trio is obsessed with solving the case, as well they should be. Complicating matters are the various jurisdictions involved, the perp’s clever methods to confuse the cops—including confessing to a number of homicides that he did not commit—and less than ideal analysis of evidence, particularly handwriting.

Before long, the investigation centers on strikingly weird convicted child molester Arthur Leigh Allen (John Carroll Lynch). But, no matter how many coincidences to the Zodiac’s profile pile up, and notwithstanding a mountain of circumstantial evidence, none of the police agencies can put together a case against him. Given this enormous setback, the case effectively goes cold.

More than that, Toschi gets kicked off homicide, Avery gets fired, and Graysmith becomes completely consumed with the case, causing his wife to leave him. Yet, seeing that Graysmith might just be able to connect all the dots, Toschi does help him in his quest.

The years pass—one scene is marked by time-lapse portrayal of the Transamerica Building being constructed—and Graysmith stays at it, eventually convincing himself that Allen is indeed the Zodiac. Determined to look the serial killer in the eye, he traces him to a hardware store in Vallejo and does just that, with more than a hint of a knowing return glance from Allen.

As to Allen, he died in 1992, never admitting his guilt. In fact, in the years before he died, he would turn to the media many times, to protest his innocence.

As in all high profile cases, a substantial cottage industry (and not-so-cottage industry) has developed. Note that the plot of Dirty Harry revolves around a serial killer terrorizing San Francisco, named Scorpio, who sent letters to the newspaper.

Beyond that, there are many who would never want the case solved, since an open case can spawn endless books, articles, and websites. Although he has been accused of capitalizing on his involvement with the case, which is obviously true given the two books, Graysmith at least presents it in a case closed format. He could name Allen as the perp is his second book, published after Allen died.

Many others claim that forensic evidence cleared Allen, but this is not the case. While it is true that the DNA found on the back of stamps used to mail the taunting newspaper letters did not match Allen, this only proves that he did not lick the stamps. Forensic evidence can only be rationally applied when there is specific involvement with the crime scene, or especially the victim. Even then, there can be plausible ways to explain it away.

Some merit must be given to the fact that in July, 1992, definite Zodiac victim Mike Mageau picked Allen out of a police photo lineup, saying “That’s him! He’s the man who shot me!”

As recently as November, 2005, the late San Francisco homicide inspector Michael Maloney complained about the case being closed, because of ego problems on the part of higher-ups, who were tired of all the attention and scrutiny, claiming that resources should be devoted to other matters. Maloney felt that they did not understand the importance of officially closing the case.

My take is that Allen was the guy, beyond a reasonable doubt.