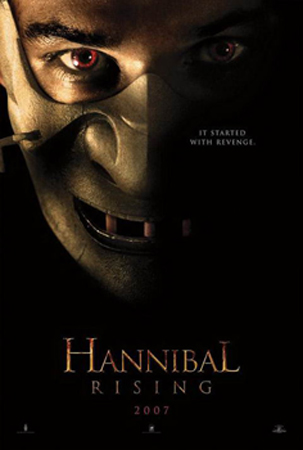 Not very good, although not quite as world class awful as some reviewers claim, this latest entry in the saga that began with Manhunter (1986), but was really jump-started with Silence of the Lambs (1991), endeavors to explain how Hannibal Lecter became a cannibalistic serial killer.

This, then, is another one of the current crop of “origins” pics, used to extend a supposed film franchise.

The film begins in the declining years of World War II, as the Germans on are the run from the Russians in Lithuania. Young Hannibal (Aaron Thomas) and his little sister Mischa (Helena Lia Tachovska), are having an idyllic time at Castle Lecter (of course). Within minutes, though, the war descends upon them and their parents are killed in the crossfire.

The two kids hide in a nearby hunting lodge, but are eventually discovered by a group of baddies headed up by Vladis Grutas (Rhys Ifans), who take charge, and eventually kill Mischa. Through flashbacks, we discover that Mischa, sick with pneumonia, dies and is eaten by the perps, although this is not shown onscreen.

A few years pass, and the action then shifts back to the castle, which has become a state-run boarding school, as Lithuania is now one of the Soviet Socialist republics. Hannibal (Gaspard Ulliel) is one of the many students, and is sharing (not too willingly) his old home with other citizens of the socialist paradise. Nearly mute and suffering from recurring nightmares from his brutal experiences in the lodge, Hannibal is bullied by one of the more enthusiastic student leaders, and eventually escapes to France.

Here, he enrolls in medical school and develops a fascination with anatomy, along with a less than healthy interest in his aunt, the Lady Murasaki (Gong Li), who schools him in the finer arts of Japanese combat. I guess the whole martial arts bit was a way to establish Hannibal’s self-defense and sword skills—all the better to kill and maim. Still, the Japanese aunt shtick is very weak, made more so by having her played by a Chinese, and spouting dialog that is plain terrible.

Lecter does get his first kill, though, at the expense of a loud and obnoxious butcher (Charles Maquignon), who insults Murasaki, using a common postwar racial slur about the horizontal nature of certain body parts. For her part, the lady is complicit, helping Hannibal get away with the crime, and delivering the butcher’s severed head to the police station.

But, our man Lecter has got bigger fish to fry, and heads back to Lithuania to look up the lodge thugs. The rest of the movie becomes a revenge fantasy, and it does pretty well along these lines, even if it is too long and dragged out. At some point here, he gets his, uh, taste for blood.

To understand the critical shredding this movie is taking, and that is well beyond what would be deserved in light of its deficiencies in writing and acting, one has to appreciate the hype surrounding Silence of the Lambs. Little more than a Grade-Z slasher flick with a name cast, Lambs somehow garnered an incredible five Academy Awards, including best actor, actress, and picture (it was nominated for seven).

Of these, only Anthony Hopkins’ (best actor in a leading role) could even be remotely justified. As it was, based on screen time, the supporting actor category made more sense, and he would have easily won. The studio took a chance at his insistence, and he hit pay dirt.

Thus, when compared to a multi-Oscar winner, naturally this cheapie prequel has got to be panned.

It certainly didn’t help Rising’s cause that it has all the earmarks of a typical runaway Eastern Euro project. Add to this the realistic portrayal of life in a Soviet republic, and the lockstep Leftie film crowd, still deluded over the Hollywood Ten, could not react any other way than it did.