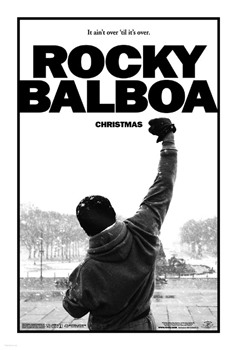 A bit too sentimental, this pic overindulges in action outside the ring, then finally comes into its own with the fight scenes. Still, dubious character arcs, zero romance (at least between people both alive), and an apparent disregard for circumstances developed in earlier Rocky films detract from the overall experience.

Rocky Balboa (Sylvester Stallone) is now semi-retired, dividing his time between his restaurant— named after his dead wife—and hanging out at her graveside. His relationship with his son Robert, Jr. (Milo Ventimiglia) is less than ideal, and even Paulie (Burt Young) has had enough of Rocky’s mourning. Clearly, something has to change.

The road to that change goes through a bar, where Rocky renews acquaintances with Marie (Geraldine Hughes), formerly a kid from the neighborhood, back in the day. Now, she’s a single mom, working as the bartender. Rocky offers her a job at his restaurant, and performs small acts of kindness, even striking up a bit of a friendship with her son Steps (James Francis Kelly III).

But the main event to effect change in Rocky’s life is a computer simulation done on TV, pitting him in his prime against the current heavyweight champion Mason “The Line” Dixon (Antonio Tarver). In the simulation, Rocky wins, prompting Dixon’s handlers to propose an exhibition match between the two fighters. It’s always fun to see AJ Benza (“Fame…ain’t it a bitch”), who plays Dixon’s manager.

Against Robert, Jr.’s best advice, Rocky accepts the challenge, and in the process, admonishes his son for blaming his problems on living in Rocky’s shadow. Never mind the boxing-caused brain damage referred to in previous Rocky episodes. Apparently, our hero has made a miraculous recovery.

Enlisting the aid of his former trainer Duke (Tony Burton), who advises him that his only hope in the fight is blunt force trauma, Rocky embarks on a training montage—to the strains of “Gonna Fly Now.” Arguably, Bill Conti’s Rocky cues are as well known as those from Jaws (1975-John Willams) and Psycho (1960-Bernard Herrmann).

Finally, it’s time for the big fight, in Las Vegas, of course. With Duke, Paulie, Robert, Jr., and Steps in his corner, and Marie in the crowd, how can he fail? Of course, the ringside commentators don’t give him much of a chance to get beyond two rounds of the scheduled ten-rounder.

Dixon’s need to have this fight, to bolster his image, is a commentary on the contemporary boxing scene. Although Dixon is a quality fighter, he can’t find any worthy opponents, and is castigated for taking on a succession of bums. Meanwhile, the mania over the simulation pokes fun at our sports-mad society.

Although viewers wouldn’t want a steamy romance between Marie and Rocky, the ultra-platonic nature of their relationship removes some emotional level from the movie, as does the under-developed (even if resolved) character of Robert, Jr. Then again, at least now we know what Rocky’s real name is.

As the closing credits roll, helmer Stallone riffs on his run up the front steps of Philadelphia Museum of Art from the original Rocky (1975) by showing clip after clip of non-celebrities performing the same feat, including the obligatory raising of both arms in triumph at the top. However, this device wears thin long before it stops, and I’m surprised that it made the final cut.

This Rocky works if you’re into nostalgia, and are willing to overlook its deficiencies. Yo, Adrian!

« WHERE ARE THE AMERICANS?
HOW TO WIN AN AMERICAN PRESIDENTIAL ELECTION–GUARANTEED »