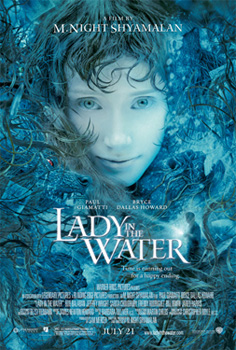 Let’s just say that Disney was right about passing on this one, and Jack Warner must be spinning in his grave, knowing that the company with his name on it facilitated this cinematic mess.

Cleveland Heep (Paul Giamatti), is the manager/caretaker of a seedy suburban Philadelphia apartment complex, hiding out from life. As we learn later in the pic, he has a tragic past. Solely to drive the plot, and unprecedented in the world of apartments, the complex rules forbid use of the swimming pool after 7 PM. But—someone is using the pool at night, and that someone turns out to be Story (Bryce Dallas Howard), a Narf (also known as a sea nymph), who has come from the “Blue World” to visit the landlubbers.

Helmer/writer M. Night Shyamalan essentially gives away the entire plot in the beginning sequence, which features crude stick figure animation telling the “ancient” tale of how the dwellers of the Blue World have mostly lost touch with the people on land, but still try, every now and then, to intercede on their behalf. For reasons not explained, they are often thwarted in these good works by hyena-like creatures called scrunts. And, after the Narf completes her mission, she gets to fly back to the Blue World. Honest.

When we get to live action, all the rules of the myth unfold at a pace slower than glacial, using the lame device of a non-English-speaking Asian resident of the complex relating all this through her daughter. Somehow, the entire Narf business is known in Asian legend. And that would be bad enough, but to ruin the pacing even more, the myth is revealed in at least three separate, painful sequences. It is unclear why Story cannot explain the details herself, and spare us the grief.

As it happens, various residents must assume certain roles in the drama of getting Story back home, and defeating the evil forces. In an entertaining turn, Bob Balaban plays a know-it-all critic, who uses his infinite knowledge of plot lines to help figure out each person’s part in the mystery. No doubt, this is Shyamalan’s revenge against the critics who hated everything he has done since The Sixth Sense (1999).

Making things even worse, Shyamalan steps in front of the camera in this movie, but far from taking a cameo, assumes a major part—with zero screen presence. With due modesty, his character will become some great guru/martyr, as predicted by Story. Exacerbating the slow, slow exposition is lots of God-awful dialog, but if all the residents immediately accept the Narf story from Heep, how good could it be?

Add to that a group of “wacky” supporting characters far more suited to a half-baked TV sitcom than a feature, replete with Hispanic and Jewish ethnic stereotypes, a precocious kid, an apartment full of slackers, and a bodybuilder who only develops his right side, you get the sinking feeling that M. Night knocked off his screenplay in about three hours.

With a nearly perfect storm of rotten story, mediocre perfs save Giamatti’s and Balaban’s, and the ridiculous images of Narf Howard either gazing meaningfully into space, prancing around half-naked, or spouting philosophy that would make the writers of the series Kung Fu blush, Shyamalan has accelerated his downward spiral.

Unbreakable (2000) had its moments, but its “surprise” ending and weak, goofy plot did not pass muster. Signs (2002), with its aliens who didn’t know that there was water on Earth, and who could be stymied by a flimsy wooden door came off as a parody of itself. Thus, it was hardly astonishing that The Village (2004) would be awful, even if it did give Howard a chance to practice an ethereal persona for this latest fiasco. There should be little doubt that the overrated Sixth Sense was just a fluke.

Shame on Warner’s for prolonging the career of this poseur, just because they didn’t want one to get away. Didn’t it matter at all that Disney turned it down? Didn’t they read the script?