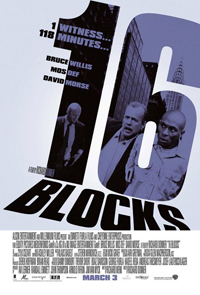 Aging and burned-out NYC detective Jack Mosley (Bruce Willis) seems to be biding his time until retirement. Limping around, out of breath with a few stairs, and drinking way too much, whatever magic he may have had is long gone. After a shift that has taken up the entire night, he’s ready to head home, but is called upon to escort a witness to court.

Mosley is none too happy about this, but how bad could it be, considering that the courthouse is a mere 16 blocks from where he picks up witness Eddie Bunker (Mos Def)? All he has to do is get Bunker to the courthouse by 10 AM, and everything is cool.

But, there will be problems along the way. First of all, Eddie is a nonstop talker with an unpleasant voice. Then, there’s the horrible Manhattan traffic. Tired of the barrage, Jack pulls the car over, leaving the handcuffed Eddie inside, to get a bottle of hooch. The ante is upped when Jack has to shoot a menacing-looking character who wants to kill Eddie.

The team of assassins is not easily foiled, but Mosley and Bunker evade them, and slip into a bar—no doubt one of the many frequented by Jack. Jack calls for backup, and is met by his former partner Frank Nugent (David Morse) and a host of other men who are not exactly New York’s finest. It is revealed that Eddie was a witness to some particularly nasty doings by this gang of bad cops, and no one thought Jack would be involved. Rather, Eddie was supposed to be escorted (and executed, or at least set up) by another of the dirty boys, but he got hung up in traffic.

A tense moment occurs in the bar, and Jack clips one of his own to save Eddie. The battle lines are now drawn, the chase is on, and it looks pretty hopeless for our heroes.

What follows is a gritty journey through an urban labyrinth, with plenty of twists and turns in the plot before it’s all resolved. Screenwriter Richard Wenk loosens things up with some humor, and even if the story is not entirely credible, it is surely enjoyable. Some negative reviews are trashing Willis’ crummy appearance, although that is clearly the point here, or berate the production for bringing in certain cop action movie clichés.

Perhaps the most hilarious complaint proffered is that the Eddie/Jack team doesn’t fulfill expected rules of how movie buddies should behave. And this criticism appeared in a review that said the film was too full of clichés!

More than a mindless action flick, 16 Blocks does touch on issues such as the inevitable physical deterioration we must all face, betrayal, mindless violence in the pursuit of not much, and life’s vicissitudes that would pair up a reformed(?) street criminal with a veteran cop.

Although this could be construed as damning with faint praise, 16 Blocks is one of 2006’s best releases, so far.