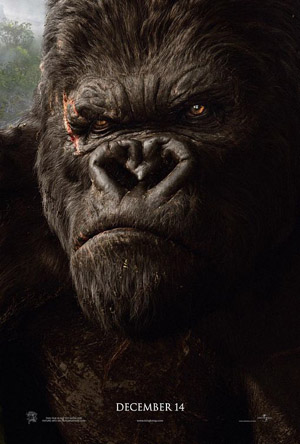 Merian C. Cooper, Ernest B. Schoedsack, Willis O’Brien, and Edgar Wallace would be proud to know that it would take 72 years for someone to improve on their original King Kong, and even then it would take one of our best film makers to pull it off—namely Peter Jackson.

Helmer Jackson offers up more than 3 hours of pure screen entertainment, expanding the storyline considerably from the 100 minute 1933 original. In fact, we don’t get our first glimpse of the star attraction until about 70 minutes into the proceedings.

The action begins in Manhattan, at the height of the Great Depression. Ann Darrow (Naomi Watts) is a vaudeville performer out of work, and briefly considers girlie shows, until she is spotted by dicey movie producer Carl Denham (Jack Black). Denham is setting up a true runaway production, in a place called Skull Island, and he is on the run from the studio execs, with crates of their equipment, film, and some employees.

Denham talks Ann into joining the project, and the ship leaves that very night. Not a moment too soon, either, with the execs in hot pursuit. Ann is a big fan of Broadway playwright Jack Driscoll (Adrien Brody), and wouldn’t you know, Denham has kidnapped, or rather, shanghaied Driscoll, forcing him to compose the screenplay, while down in his meager quarters, normally used to transport animals.

After many days at sea, the ship’s captain (Thomas Kretschmann) is about to mutiny against Denham, until the weather forces them onto Skull Island, where the natives are anything but friendly. To Jackson’s credit, he mixes in several ethnicities here, so no one could accuse him of racial stereotyping (although they still will).

Ann is taken by the natives, as their latest sacrifice to giant ape King Kong, who perhaps has never seen a blonde chick before. Ann, however, wins the heart of the beast, who ends up being her protector, rather than having her as a snack. Meanwhile, the crew goes through various degrees of Hell—to say nothing of losing many men—to rescue Ann, and eventually capture King Kong.

Several critics have complained that there are too many perils in this sequence, and it is overwhelming. They don’t seem to understand, that it is supposed to be overwhelming. Here are moderns, dropped into a primordial jungle. Why shouldn’t it be endlessly perilous?

Beyond overcoming Kong with chloroform, Jackson spares us the details of the voyage back to the Big Apple. The third act has us thrown back onto Broadway, where Denham is going to show off his latest triumph. The ape escapes, of course, wreaking havoc on the New Yorkers, only to meet his inevitable fate. Twas beauty killed the beast.

King Kong 2005 focuses on the relationship between Ann and the ape. She is surely impressed by the way he fights off all sorts of her attackers, and shows real jealousy toward Driscoll, his human rival for her affections. Perhaps Kong is nothing more than an overgrown “horse fantasy,” similar to the fascination prepubescent girls have for the virile but sexually nonthreatening stallion.

After all, back in NYC, Ann needs a strong male figure in her life, and might welcome a platonic relationship. We do note that while she has a shipboard romance with Driscoll, they are not in touch when back in New York, until Kong’s final night.

Jack does rescue her from the top of the Empire State Building, as his rival falls to his doom. Kong may have been king of the jungle on Skull Island, but he failed the test on the jungle of Manhattan Island.

We remember in sorrow that in the awful 1976 version of King Kong, he falls from one of the Twin Towers. Plus ça change, plus c’est la même chose.

« CONSTITUTIONAL RIGHTS AND WRONGS
THE LION, THE WITCH, THE WARDROBE, AND THE HUMBUG »