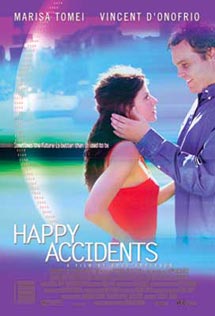 Let us then examine “Happy Accidents” (2000)—an odd combination of romantic comedy and science fiction.

Ruby Weaver (Marisa Tomei) is a 20-something single lady in the Big Apple, who has lots of trouble finding the right man. She commiserates with friends Gretchen (Nadia Dajani) and Claire (Lianna Pai), and the three of them keep a shoe box filled with photos of former boyfriends, dubbed the “Ex Files.” Which brings us to our first little cultural point: All of these women, and especially the then 36-year-old (and looking every bit of it) Tomei are too old to play the roles, that only make sense if the women are under 30. A group of 30-something women on the prowl in the big city creates connotations that would simply not apply to these characters.

However, since the rubrics of the times require an assiduously pro-female (You go, Girl!) and anti-male (except for the wisecracking gay friend) posture, it doesn’t matter who plays the parts. That’s why it also doesn’t matter that Ruby’s mother is played by Tovah Feldshuh, a scant 12 years older than Tomei.

Quite by chance, Ruby meets Sam Deed (Vincent D’Onofrio), a nice guy, who works for a hospice. Sam tells Ruby that he is from Dubuque, Iowa, but then reveals that it is Dubuque of 2470 AD. Sam is a time traveler from the future!

Ruby doesn’t know what to make of this, since Sam is providing many credible details of life in the 25th century, including the difficulties between the anachronists and biologicals (his side) and the gene dupes. The gene dupes, who reproduce without sex, are in control, and life seems to be pretty grim. As Sam reveals more of his story, it turns out that he had to leave the future, since he was framed for the murder of his sister.

His sister really died accidentally, and in preparing his defense, he consults what must be the most exceptional database of all time. It actually includes the accident that will kill Ruby, on the streets of Manhattan, 470 years earlier. Not only this, but the record includes the exact time of the incident, the precise location, and the name of the driver who hit her. Given the many thousands of accidental deaths that occur each year in the US, and the incredible logistical problems involved in compiling data from various state, local, and federal sources, this feat almost rivals time travel.

Sam is captivated by Ruby’s picture, that conveniently appears in her death record, and when he decides to flee to the past, chooses Ruby’s town as his destination.

For her part, Ruby notices that Sam is a bit quirky, but decides to play along, after determining that he is not religious. Apparently, being religious (or being a cult member, conflated as one and the same thing) is the death knell of any relationship. Not to worry, though, since Sam tells her that, “Religion goes out of favor in 2037 when science discovers the gene that regulates fear.” Of course, this doesn’t mean anything, but it will certainly satisfy the fashionable atheists, with Darwin fish emblems on the back of their cars.

Sam regurgitates more of the PC pantheon when he tells Ruby that Dubuque of 2470 is on the Atlantic coast—a consequence of the polar ice caps melting under global warming. Additional pop attitudes have Gretchen telling Ruby not to worry about anything with Sam as long as the sex is good, and Ruby’s mother lamenting that the passion is gone in her relationship with the father. It seems that everything was great until he stopped being an alcoholic (and, presumably when she stopped being co-dependent).

There is little suspense regarding the veracity of Sam’s claims. After all, Ruby’s therapist and a former beau are unmasked as refugees from the future. What are the odds that one woman in New York would know three time travelers, unless it were a whole lot more common that Sam implies?

Finally, in a bizarre character arc, after kicking Sam out of her apartment, she then comes to believe his story, but then disregards his urgent instructions to stay inside that day, to avoid her accident. And, via a plot contrivance that frankly makes no sense, Sam prevents her from being killed.

The image of Ruby that Sam fell in love with in 2470 is a photo taken by Gretchen, during a beach party, at which Sam was present. Once you consider the implications of that situation, including that Sam would have known Ruby before he knew her, you can only marvel at the sloppiness of the writing. And for the topper, the image of Ruby is far from flattering—hardly something that could reach across vast stretches of time.

But if the face of mythical beauty Helen could launch 1000 ships, then a 470-year-old non-glamour pose of a present day liberated woman can launch a time machine.

« YOU CAN’T PLEASE EVERYONE, SO YOU’VE GOT TO PLEASE YOURSELF…
PRO-ENVIRONMENT? NO, JUST ANTI-HUMANITY »