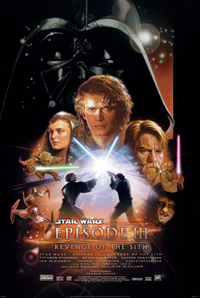 Episode II – Attack of the Clones (2002) ended with the secret marriage of Anakin Skywalker (Hayden Christensen) and Sen. Padmé Amidala (Natalie Portman). The opening titles of Revenge tell us that galactic warfare has broken out, that there are heroes on both sides, and evil is everywhere. Sure enough, the pic starts right out with a frantic mission, displayed in full video game splendor mode, as Obi-Wan Kenobi (Ewan McGregor) and Anakin must save the kidnapped Chancellor Palpatine (Ian McDiarmid).

Things start getting confusing, though, when baddie Count Dooku (Christopher Lee), a master of the Dark Side of the Force, although involved in the kidnapping plot, seems to be in cahoots with Palpatine. From this is dug several plot holes: The staged kidnapping still required a dangerous rescue, that could have killed Palpatine, and the many improbable betrayed alliances seem to serve little purpose, beyond more light saber duels.

As for Anakin, he is worried about his pregnant wife, since he has visions of her dying in childbirth. His earlier visions have been sadly accurate, including that of his mother dying at the hands of Sand People. Besides, as a Jedi, he is not supposed to have any romantic entanglements, let alone be married.

Anakin wants to be the greatest Jedi, and no doubt could be, if the Jedi weren’t such a bunch of self-absorbed killjoys. To say that they are mistreating their best recruit—the one they call the “chosen”—is a huge understatement, so it comes as no surprise when Anakin joins the other side. He is taken in by Palpatine, who reveals the advantages of the Dark Side, the main one to Anakin, worried about Padmé, being that its greatest practitioners can actually prevent or reverse death.

But, the Dark Side really is more powerful, and that is because, unlike the Light Side, it USES emotion, rather than trying to hide it away. Moreover, the Dark Side is not inherently evil, although evil people will surely be attracted to its great power. Why the Jedi refuse to employ its power is a mystery that is never explained, and pervades the entire film series.

Furthermore, it is quite absurd that none of the Jedi masters can sense a “disturbance in the Force” when either Palpatine becomes the Dark Lord Darth Sidious, or when Anakin becomes Darth Vader. It is also questionable whether Palpatine is truly “evil.” After all, he is trying to keep the Republic (later the Empire) together, composed of thousands of planets, that would just as soon be at constant war with one another. And, in this regard, he is voted extraordinary powers by the senate—a bloodless coup, if there ever was one.

It is very nice for Padmé to remark, in perfect know-nothing fashion, that “This is how Liberty dies – with thunderous applause,” while the senate cheers Palpatine as the new emperor. Does she prefer nonstop war? Ironically, the problem derived from attempting to create such a large and far-flung republic in the first place. Why DID all these planetary governments think they had to unite, anyway? Heck, we can’t even do that on one little planet of our own, can we?

Anakin:  If you’re not with me, you’re my enemy.
Obi-Wan:  Only a Sith Lord deals in absolutes. I will do what I must.

Anakin’s line is being compared to a statement by President Bush on the War on Terror, and not favorably. However, during a war, and in an argument between potential combatants, can it be any other way? If you are not on Anakin’s side, you ARE his enemy. The two are soldiers, and they cannot be neutral, regardless of what effete Leftists might think.

Obi-Wan’s reply, so dear to the pop culture, is false in numerous respects. The Jedi, in dealing in their own stupid absolutes, have CAUSED Anakin to go over to the Dark Side, and even though they realize that the Dark Side is more powerful, prefer defeat, and loss of untold life to maintain their own misguided rigidity. In the big picture, absolutes ARE what we must deal with: Good and evil, truth and lies, life and death. It matters not whether today’s taste makers are uncomfortable with this concept. Avoid absolutes at your peril.

Apologists for Lucas will point out that Vader does finally act as the chosen one, when he kills the emperor at the end of Return of the Jedi (1983), but that is way too little, way too late, and trivializes his own epic.

By now, Lucas may be well past worrying about such details. Gone is the repartee between Harrison Ford, Mark Hamill, and Carrie Fisher in the first pic, as well as the charisma of Alec Guinness. In Revenge, scene-stealer Christopher Lee is killed off soon enough, while Jimmy Smits and Samuel L. Jackson, usually reliable, are completely uninspired here. Thus, it is left to McDiarmid to carry the show, and carry it he does, even if he looks awkward during the rescue from the faux kidnapping.

Perhaps it does all make sense, in its own perverse way. The details of the story don’t matter, and loose ends need not be tightened up. Who cares if millions have perished, and worlds have been destroyed? The entire epic, and all its conflicts, are contained within the only character appearing in all six episodes—Anakin Skywalker/Darth Vader.

Which leads us to a much better title for the series. Of course, Lucas would likely have been sued, had he called it “Lord of the Sith” instead of “Star Wars.”