Taut actioner, featuring Jason Statham and an oversupply of villains: The Russian mob, Triad gangsters, corrupt cops, evil politicians, and shady government operatives. All this against a backdrop of the mean streets of New York City. What’s not to like?

Mei (Catherine Chan) is a gifted 12-year-old Chinese girl, who has been taken out of her school, to perform an important task for the Triads. With her photographic memory and immense mathematical skills, she is recruited to help gangster Han Jiao (James Hong) pull off some sort of scheme in the Big Apple. Mainly, she has to memorize a very long number, which is to be matched with another very long number to get the sizable payoff.

Apparently, Han feels that relying on a human is much safer than using encrypted computer data, or something.

Meanwhile, we are introduced to Luke Wright (Jason Statham), down on his luck—not to mention having run afoul of the Russian mob, who brutally killed his wife, and threaten everyone around him. He is seriously contemplating suicide, by jumping onto subway tracks, when he spies Mei, herself running from the Russian mob, who temporarily abducted her from the Triads in NYC. Luke decides to help her. Indeed, it is his reason for living.

Adding complexity to the proceedings are a group of corrupt cops, led by Captain Wolf (Robert John Burke), who is playing the Russians against the Chinese, and demanding his pound of flesh. It rapidly boils down to Mei and Luke against the world, as the baddies get knocked off, leading up to the final confrontation—in which corruption is revealed at the highest levels.

It is sadly quite believable that Mei can be plucked out from her classroom in China, to be used for nefarious purposes. But if Chinese officials are corrupt, they could learn a thing or two from the city fathers of NYC —or so this movie would suggest.

Another point that rings true is that the tragic attacks of 9/11 are being used to enrich a small number of individuals. Here, the panicked atmosphere in the wake of the attacks justifies a federally-inspired secret hit squad, which obtains the key to a huge fortune. The big numbers camouflage a safe combination (hence the double-meaning of the pic’s title).

Although it has nothing to do with this film, I couldn’t help thinking of Laurence Olivier’s famous line from Marathon Man (1976), which he repeats and repeats: “Is it safe?” On the other hand, the dark 1970s notion of not being able to trust anyone portrayed in that film, as well as the setting being New York City, indicate a few similarities between the two movies.

It is revealed toward the end that Luke and the mayor’s aide (lover, actually) were both on the secret hit squad. Interestingly, there is no plot reason for the mayor and his aide to be gay, other than the now quite limited shock value. True, they want to get the money and live happily ever after, but who doesn’t?

Inexplicably, Luke and Mei keep almost none of the fortune for themselves. Considering that Mei has locked in her brain the full extent of Han’s US operations—deposited in various secure locations—they would have probably have been “safe” in taking a chunk of the loot. 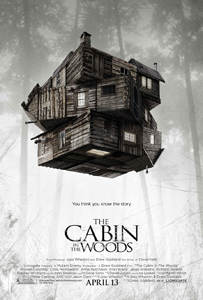 A clever spin on the typical mad slasher tale, featuring send-ups of virtually every horror movie cliché you can think of—and some you would rather have forgotten. Replete with numerous twists, reveals, false endings, pointless details, and plot holes you could drive a truck through, this entry (sitting on the shelf since 2009) is nonetheless quite entertaining.

As the pic opens, various images of ritual human sacrifice are portrayed, and the significance of this will become clear later. We now move to some sort of high-tech facility, where engineers Hadley (Bradley Whitford) and Sitterson (Richard Jenkins) are discussing a scientific matter. Apparently, something big is about to occur, and the US seems to be in competition with a number of other countries in whatever this affair might be.

At this point, we switch to the conventional horror movie portion of the proceedings, in which five stock characters, including a jock, nice girl, naughty girl, stoner, and intellectual are heading to the eponymous cabin. The group begins to explore the cabin, and—as a trap door opens—discovers a creepy cellar, containing every horror movie prop known to man.

Before long, Dana (Kristin Connolly), the nice girl, discovers a diary, and by reading some incantation in Latin, unleashes a gaggle of zombies that viciously attack our heroes. Meanwhile, back at the high-tech facility, we learn that the zombie attack is but one of dozens, if not hundreds, of possible murderous scenarios that could have been triggered by various objects in the cellar. Indeed, the scientists there are watching every move in the cabin, and have even bet on which plague will be unleashed.

There is a purpose to all of this mayhem, and as the scene switches back and forth between the cabin and the high-tech facility, the awful truth will be revealed, amid a goodly amount of old-fashioned gore.

Although this is hinted at virtually from the beginning of the movie, the purpose here is to offer human sacrifice to appease evil gods, who live under the Earth. I suppose that this ritual has been performed since the dawn of civilization, but lately high-tech is the way it happens. Absent the sacrifices, the planet would be destroyed.

The big players in the sacrifice game are the US and Japan, but this time, the Japanese scenario—using a stereotypical J-horror girl with stringy black hair—fails hilariously, and it’s up to the Yanks to win the day…only we don’t.

Given the many possible death scenarios, the cabin/high-tech facility must keep on hand all sorts of horrible creatures, including a “sugar plum fairy” demon, with teeth for a face, weird marine creatures, space aliens, werewolves, a demon with saw blades in his head, and a giant praying mantis, as well as the killer zombies. Of course, the entire lot of them is unleashed at the end, and they kill all the scientists.

Maintaining this menagerie has to be a Herculean effort, never elaborated on. I guess with the survival of the world at stake, budget is no problem.

Through various twists and turns, it all comes down to Dana and the stoner Marty (Fran Kranz), who fight it out with the main puppet master Sigourney Weaver, in a surprise cameo.

One wonders how the human race could have survived at all, if you consider the epic fail by the Japanese team, and the incredibly sloppy job done by the Americans. This is the best that the two tech powerhouse countries could come up with?

And, here’s the biggest plot hole of them all: With several countries in competition for the ultimate human sacrifice scenario, thousands of people must be employed, not to mention an equal number of support vendors and ancillary personnel. Exactly how is such a massive undertaking kept secret from the “civilians”?