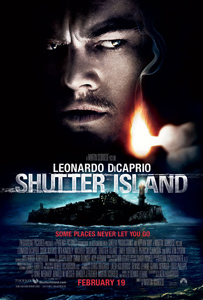 Relentlessly creepy, with good performances and music that tends to the melodramatic. The plot twist will be anticipated by many viewers, and could disappoint. All things considered, though, the story (from a best-selling book by Dennis Lehane) is strong, and upon reflection, the twist is the best course the plot can take. A valid complaint is the excessive running time of 138 minutes.

As the pic opens, it is 1954 and US Marshals Teddy Daniels (Leonardo DiCaprio) and Chuck Aule (Mark Ruffalo) are headed by ferry to Shutter Island, located in Boston Harbor. The island houses Ashecliffe Hospital, a state-run institution for the criminally insane, and the agents have been called in to investigate the disappearance of a patient from the high-security facility. This particular patient killed her three children.

The duo find it hard to believe that someone could have escaped, given the rugged terrain, cold water, and lack of any sort of vessel to make the crossing. Still, they have their job to do.

Soon, they are introduced to Dr. Cawley (Ben Kingsley) and Dr. Naehring (Max von Sydow), the lead psychiatrists, who do not seem terribly motivated to help with the investigation. Worse, Naehring appears to be an ex-Nazi, and that hardly sits well with Teddy, a decorated soldier who participated in liberating Dachau during World War II.

Worse yet is the deteriorating weather, which may cause power losses, and could strand them on the island.

During the course of the investigation, senior agent Teddy reveals to Chuck that he has an ulterior motive, and in fact pulled strings to get the assignment. His wife Dolores was murdered a few years earlier, and he thinks that the culprit, one Andrew Laeddis, is a patient/prisoner at the facility. Dolores (Michelle Williams) will appear in visions to Teddy from time to time during the movie.

But finding Laeddis may not be easy. Besides Building A for the women and Building B for the men, there is also the foreboding Building C, housing the most violent patients. Entry to Building C requires special permission, which Teddy is sure he would not be officially granted. What’s more, there are rumors of horrific Nazi-style medical experiments going on at the island’s lighthouse, and he wants to look into these, as well.

As the storm’s intensity increases, the duo get their chance to enter Building C, and Teddy does find Laeddis. But the marshal may have been given hallucinogenic drugs by Dr. Cawley, and can’t be sure of very much. As it is, Teddy has been having terrible flashbacks regarding Dachau and seems to be unraveling mentally.

A break in the weather allows him to continue on to the dreaded lighthouse, where all will be revealed.

« CRAZY HEART
YOUR LOSS OF FREEDOM: THE FIX WAS IN FROM THE BEGINNING »