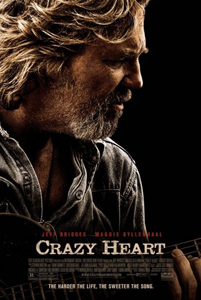 A bravura performance by Jeff Bridges makes up for a weak script, hampered largely by a poorly conceived female lead. Tender Mercies (1983) covered this ground (broken down country singer/songwriter seeks redemption through the love of a good woman) a whole lot better.

As the pic opens, country artist Bad Blake (Jeff Bridges) is driving through New Mexico on the way to a gig at the bar attached to a bowling alley in a small town. Blake, once a legend in country music, is none too pleased with this state of affairs, but after several marriages and too much drinking—not to mention that this gifted songwriter hasn’t written anything new in years—what more can he expect?

Still, he seems to be arguing constantly with his manager Jack Greene (Paul Herman), who also handles current young giant country star Tommy Sweet (Colin Farrell). Bad was a mentor to Tommy, and provided him with numerous hit songs, which presumably earned him plenty of cash. Yet, he bears some sort of grudge against Tommy, that is never really explained in the movie.

Clearly, Blake is in bad shape, as he has to take a puke break during one of his performances at the bowling alley.

Bad’s next gig is in Santa Fe, at a somewhat better venue. He arrives early and hears keyboard man Wesley Barnes (Rick Dial) playing some tasty licks. Bad compliments him on his skill, and Wesley asks if his journalist niece Jean (Maggie Gyllenhaal) can interview him after the show. Bad agrees, and in pretty short order, he and the much younger Jean have a relationship.

Blake gets an offer to open for Tommy Sweet in Phoenix at a big concert, and although initially being against it, consents to do this. He is rewarded by Tommy coming on stage during his set to perform a duet of one of Blake’s signature songs—much to the delight of the crowd.

Bad really starts to bond with Jean and her four-year-old son, but Jean warns him not to drink in front of the boy. Blake also tries to reach out to his own long-lost 28-year-old son. The rest of the film deals with Bad turning his life around, even if there may not be a storybook ending in all of this.

One of the reasons I liked Tender Mercies better than Crazy Heart is that the story made much more sense, and the female lead—played by Tess Harper—was more believable. Maggie Gyllenhaal is game, but does not really have the looks to pull off the part, and the part itself is dubious.

She is so attracted to Blake, that she sleeps with him by the second night, and professes her love soon thereafter. Yet, a relatively minor incident—not well dramatized, and related to Bad’s drinking—breaks up the relationship for good, even when Bad expresses sincere regret, his love, and gets sober.

In Tender Mercies, Mac Sledge (played by Robert Duvall, who also appears in Crazy Heart), is redeemed by Rosa Lee (Tess Harper). He stops drinking, reconciles with his own daughter, and gains a new family by marrying Rosa Lee. This all works in Horton Foote’s beautiful, Oscar-winning screenplay.

In Crazy Heart, Bad Blake stops drinking, does not reconcile with his son, and gets dumped by Jean. Even his reconciliation with Tommy Sweet is implied, rather than shown.

The tagline for Crazy Heart is “The harder the life, the sweeter the song.” Sure enough, during the interview when Jean asks Bad where the songs come from, he replies: “From life, unfortunately.” It does seem like overkill that nothing on the romantic/family side works out for Bad Blake, and this is driven home further in a pointless scene in which Jean encounters him at a local concert appearance 16 months after the main action.

She is sporting a wedding ring (from “a real good guy”) and press credentials from a bigger paper. She asks the newly successful Bad (now using his given name of Otis) for another interview. He accepts, of course.

Sorry, but this whole bit didn’t work for me. Too bad the late Horton Foote wasn’t available for a rewrite.