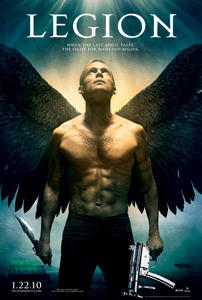 Not quite as bad as the critics would have you believe, this pic certainly has an interesting premise. God is fed up with humans, and is raining down destruction via His angels, who are taking over countless human shells to help with the Apocalypse, or at least the extermination. However, one of the top angels—the archangel Michael—isn’t going along with the program, and is trying to save humanity.

The movie opens with Michael (Paul Bettany) landing on Earth in a Los Angeles alley, whereupon he cuts off his wings, takes a police car, and fills it with plenty of weapons and ammo. We don’t know where he is heading, but then the action shifts to the Paradise Falls diner, located somewhere in the Mojave desert.

The first sign of trouble comes in the form of a little old lady with a walker (Jeanette Miller), who transforms herself into a demon who can walk on the ceiling, clearly interested in killing everyone in the diner. The lady/demon is shot in the nick of time, but this attack, along with the dead phones, has definitely freaked out our diner folks.

Soon after, Michael shows up at the diner, explaining the situation to the bewildered occupants. When asked if he has come to protect them, he answers, “No. I came to protect her (pointing to Charlie).” Charlie’s soon-to-be-born baby is apparently mankind’s only hope.

Hoards of zombie-like attackers will come, but “all” our little group has to do is fend off the multiple assaults until the baby is born. Adding to the excitement is that Michael’s brother, the archangel Gabriel (Kevin Durand), has been sent to kill Michael and the baby.

In keeping with the movie formula, many of the characters will not survive, and nearly all of them—with their mortality in sharp focus—express regrets. If anything, there is too much talk, and although there is intense action, it seems as if much more was left in the editing room, along with some plot.

No doubt, a variety of theological issues are introduced, but they are just introduced. Since Lucifer started off as an angel before going to the dark side, the notion of an angel turning against God’s will is established, even if this was a one time occurrence. But, exactly how a child born on what will turn out to be Christmas day will save mankind is never explained, and certainly begs the question in that another child sort of beat him to it, around 2000 years ago.

There are also Old Testament references suggesting that God would never repeat the total destruction wrought by the Flood, and that even a small number of people would be worth saving. Perhaps a more sound premise would have involved some random fallen angel (certainly not an archangel) unleashing waves of destruction.

Legion has its moments, but does not quite satisfy.